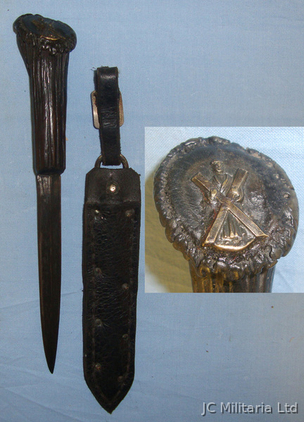 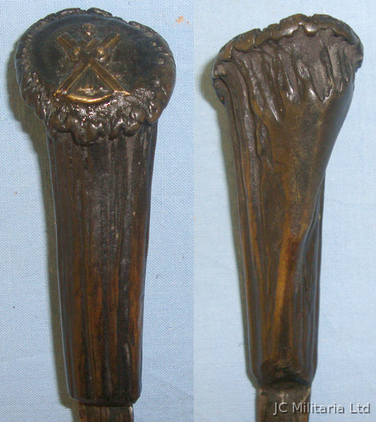 The Royal Scots (The Royal Regiment), once known as the Royal Regiment of Foot, was the oldest and most senior infantry regiment of the line of the British Army, having been raised in 1633 during the reign of Charles I of Scotland. The regiment existed continuously until 2006, when it amalgamated with the King's Own Scottish Borderers to become the Royal Scots Borderers, which merged with the Royal Highland Fusiliers (Princess Margaret's Own Glasgow and Ayrshire Regiment), the Black Watch, the Highlanders (Seaforth, Gordons and Camerons) and the Argyll and Sutherland Highlanders to form the Royal Regiment of Scotland. At the outbreak of WW1 elements of the Regiment landed in France as part of the british Expeditionary Force (BEF). The Regiment saw much action throughout the Great War. This is an original WW1 British improvised trench/fighting knife mounted with brass St Andrew & Cross device from a period Royal Scots Regiment badge and leather scabbard. The knife features a stag antler hilt, the butt end mounted with the St Andrew & Cross device. The slim blackened iron blade is 5 ½” in length. The blade has no manufacturer or date marks. It is 9 ¼” overall length. The knife is complete with its original field made leather scabbard with belt loop and retaining strap with buckle. The front and back sections of the leather are held together with metal split pins and a leather tab with metal ring secured by split pin holds the belt loop / retaining strap in place. The leather and strap / loop are all intact with just surface wear to be expected. The price includes UK delivery. Sn 18813