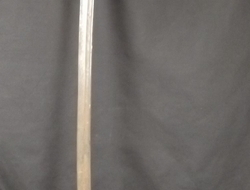 
Here we have a very interesting sword, it appears to be a sword of Ottoman design but it does not appear to be a Turkish blade. Most likely this sword was from one of the Eastern European soldiers of the Ottoman Empire.

The sword is a rather long one indicating that it is a cavalry sword by design and has a three bar guard in a very simplified gothic style, something the Ottoman Turks did not use, using crossguards and knuckle bows, suggesting this is a cavalry sword owned by an Ottoman soldier in the Balkans.

The guard is marked with a crescent, something present on all Ottoman swords.

The guard is brass with a knuckle guard and some thumb protection.

The cover of the handle has worn away exposing the bare wood.

The blade is long and with a slight curve, very similar to European swords from the 19th century.

The sword appears to have been sharpened.

The sword is in an as found condition, it is in good condition for its age but has some damage.

The guard has one section by the blade that has snapped.

The wooden scales of the handle have cracked and been adhered to the tang.

The blade has surface rust but no edge damage.