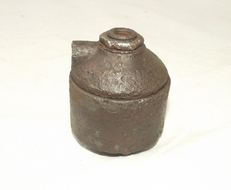 
This is a Karabingranate 1917, a German counter part of the French Viven-Bessière grenade which the French introduced in 1916, revolutionizing the trench warfare.

Based on the same general principles than the French VB, it was likewise cylindrical, innerly prefragmentated, introduced in a sleeve fixed to the Mauser infantry rifle, propelled by a conventional ammunition combustion gasses, and explosive after a fixed time triggered by the passing of the bullet inside of a central tube.

Major differences were found in its bigger size (6 cm diameter instead of 5 cm for the VB), and by the ignition system, not triggered by the bullet hitting a small hammer like with the VB, but instead igniting a lateral starter communicating with the detonator via a radial channel.

The maximum range could reach 180 m.

The grenade is inert.

Its overall condition is fair for its age with general pitting and surface rust.

In our community section
More about this: What's Happening with general Licenses? A 2020 Update
Display map