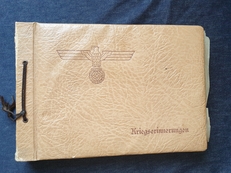 
This is a wartime photo collection of a German soldier who took part both in the French and Russian campaigns.

Please mid the fact that the pictures do not present the album in its entirety, but are only a mere representation of it.

The uniforms with the black collar suggest before anything else that a significant number of the pictures were taken before 1942. Also, one of the pictures depicting the soldier and his family is stamped, Brandenburg.

Another depicts him in front of a French WW1 heroes monument. It seems that he has spent a good part of the 1940 winter being stationed in France.

Pictures from the Russian front clarify the mystery of the unit from which this soldier was part of. It was the 28th Jäger Division under Generalmajor/Generalleutnant Johann Sinnhuber

The division was originally formed in October 1936 in Breslau, Silesia, as the 28th Infantry Division (this lineage giving it the divisional nickname of the Eisernes Kreuz Schlesische Division, the 'Iron Cross Silesian Division'). After action in the Crimea, and taking heavy casualties in the siege of Sevastopol, it was reconstituted as the 28th Light Infantry Division in December 1941, and then as the 28th Jäger Division in July 1942.

The 28th Jäger Division fought largely on the Leningrad front, as part of Army Group North. In July 1944 it participated in the unsuccessful attempt to break the encirclement of the Fourth Army east of Minsk during Operation Bagration. In late 1944 and early 1945 it fought in East Prussia with the rebuilt Fourth Army, being largely destroyed or captured in the Heiligenbeil Pocket. After absorbing some elements of the destroyed 102nd Infantry Division the remainder surrendered to the Soviets in Samland.

The main purpose of the German Jäger Divisions was to fight in adverse terrain where smaller, coordinated units were more easily combat capable than the brute force offered by the standard infantry divisions. The Jäger divisions were more heavily equipped than mountain division, but not as well armed as a larger infantry division. In the early stages of the war, they were the interface divisions fighting in rough terrain and foothills as well as urban areas, between the mountains and the plains. The Jägers (meaning hunters in German) relied on a high degree of training, and slightly superior communications, as well as their considerable artillery support. In the middle stages of the war, as the standard infantry divisions were downsized, the Jäger structure of divisions with two infantry regiments, became the standard table of organization.[

In 1943, Adolf Hitler declared that all infantry divisions were now Grenadier Divisions except for his elite Jäger and Mountain Jaeger divisions.

For international postage please contact us via the messaging service and we will post tracked at cost....Read full description
CategoryAccessories
SubcategoryOther Accessories
ConditionUsed
Price£ 250
Sale typeTrade

In our community section
More about this: The biggest two-day country show in the UK is just...
Display map