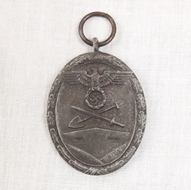 
The West Wall Medal (German: Deutsches Schutzwall-Ehrenzeichen) was a decoration of Nazi Germany. It was instituted on 2 August 1939 and was given to those who designed and built the fortifications on Germany's western borders, known as the Westwall or, in English, the Siegfried Line, between 15 June 1938 to 31 March 1939. On 13 November 1939 eligibility was extended to include servicemen of the Wehrmacht who served on the Westwall for at least ten weeks. In all 622,064 medals were awarded until 31 January 1941, when awards of the medal ceased.

In 1944, after the allied invasion, the medal was re-instituted and awarded to those who renovated and strengthened the fortifications on the western borders. This version of the medal was commonly known as the "Defence Wall Honor Award", to distinguish the decoration from its 1939 counterpart.

The medal has standard dimensions.

The medal is in good used condition, as seen in the pictures.

In our community section
More about this: The UK Revokes its Licences for Pigeon and Crow Sh...
Display map