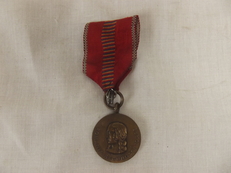 
This is the rare version with the "P. GRANT" text and it has its original ribbon.

The Medalia Cruciada împotriva comunismului ("Crusade Against Communism medal", in reference to Operation Barbarossa) was a Romanian military award of World War II. It was instituted on April 1, 1942 by the Royal Decree No. 1014, of King Michael I of Romania. It was commissioned to recognise the distinguished service of Romanian and other Axis Powers military and civilian personnel operating on both the Eastern and Home fronts.

The medal continued to be awarded until its disestablishment in October 1944, after Romania joined the Allies, and issued retrospectively to the starting date of Operation Barbarossa (the Axis invasion of the Soviet Union). Cruciada împotriva comunismului was produced by a number of firms within Romania, and was also made under licence by the German maker C. E. Junker of Berlin. The number of medals made and awarded is unknown, but believed to be in excess of 1,250,000.

The medal, of 31.5 mm in diameter and of brass construction features on the front side a clenched fist holding a sword representative of the campaign. The same side also displays the date 1941 and around its circumference is written CRUCIADA ÎMPOTRIVA COMUNISMULUI. The reverse side features the Romanian liberty symbol and the phrase ROMÂNIA RECUNOSCĂTOARE, translated in English as "Romania is Grateful".
The reverse sometimes features the name "P. GRANT" under the liberty symbol (as is the case with this one). The medal is suspended by medal ribbon which is of primarily of red, bordered by white and the centre featuring the national colours of Romania, red, yellow and blue.

Whilst not rare today, following the war, many awards were discarded by their owners for fear of prosecution and reprisal by the Soviet occupiers and later by Communist authorities.

Both the medal and the original ribbon are in good order.