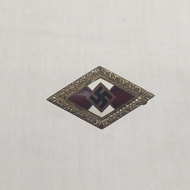 
An original WW2 Second World War Third Reich Nazi German Hitler Youth Leaders badge. The badge being a Gold Class with Oak-leaves example in a rhombus shape with red and white enamel to the centre depicting the Swastika emblem.

The Golden Hitler Youth Badge with Oakleaves (German: Das Goldenes Hitler-Jugend Ehrenzeichen mit Eichenlaub) was instituted in 1935 to recognise exceptional services to the Hitler Youth. Only about 250 were awarded. The badge is similar to the other badges, but is framed with a narrow border of oakleaves and is of higher workmanship. It was recognised as an official Party decoration, and could therefore be worn on any uniform.

There is some loss to the gold gilt in places, the enamel is excellent, the clasp works well. The gilt surrounding the swastika has mellowed with time as well.

The badge is of the standard size, namely 3.4 cm approximately across.

In our community section
More about this: The Great British Shooting Show
Display map