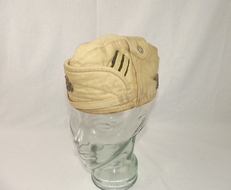 
These caps were worn by the Italian soldiers of the Waffen-Grenadier-Brigade der SS (italienische Nr. 1), renamed later the 29th Waffen Grenadier Division of the SS (1st Italian) or Legione SS Italiana.

Our cap is bearing the rank of First Seargeant (maresciallo ordinario) on the left side, has the Totenkopf skull to front and the Italian SS eagle badge to side (Eagle stamped 800 for silver purity).

In October 15,000 volunteers started training at Truppenübungsplatz Münsingen, but 9,000 of them were unsuitable and released for training in Police units, the Black Brigades or for labor. The soldiers wore Sig rune (SS Runes) on red rather than black, and the left sleeve had a Reichsadler, not with a swastika, but with fasces.

In April 1944 three battalions fought against Allied bridgeheads of Anzio and Nettuno with surprisingly good results, for which Heinrich Himmler on 3 May 1944 allowed them to wear SS-Runes on black rather than red and be fully integrated into the Waffen SS.

In Spring 1945 the Division under command by SS-Oberführer Ernst Tzschoppe as Kampfgruppe Binz fought against French units in Lombardy and Resistenza in Piemont.

On 30 April 1945 the last elements of the Division surrendered to US troops in Gorgonzola, Lombardy.

The cap is size M.

The cap is in excellent condition, free of damage and with normal wear on it.

UK postage is £15, international at cost and it can be viewed in our shop....Read full description
CategoryAccessories
SubcategoryClothing
ConditionUsed
Price£ 850
Sale typeTrade
Your referenceMLGFE
Recommended UsageCollection item

In our community section
More about this: Gunstar boast record-breaking year, securing their...
Display map