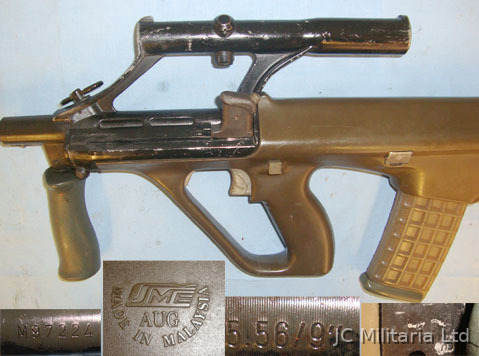 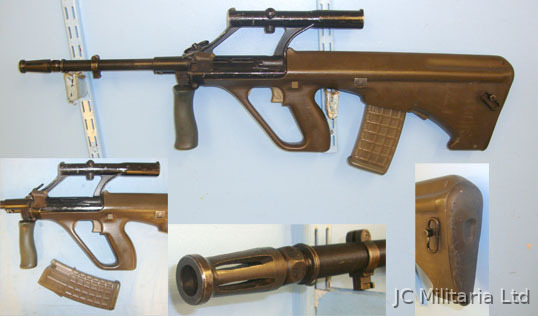 
The SME Ordnance Company (SMEO), formerly known as Syarikat Malaysia Explosive, is a Malaysian defence company that specialises in the manufacturing and marketing of ordnance. Created in 1969 SMEO is a subsidiary company of National Aerospace and Defence Industries. In 1991, SMEO acquired a licence to manufacture Steyr AUG rifles. The Steyr AUG A1 (German: Armee-Universal-Gewehr, R01;'universal army rifle') is an Austrian bullpup assault rifle designed in the 1960s by Steyr-Daimler-Puch, and now manufactured by Steyr Mannlicher GmbH & Co KG. The AUG has a 1.5× telescopic sight that is integrated with the receiver casting and is made by Swarovski Optik. It contains a simple black ring reticle. This example is in very good condition. The optics of the sight are excellent. It has a 20” barrel with flash suppressor and bayonet lug. Its composite stock and magazine are clean and undamaged. It has a padded recoil pad and sling swivels. The rifle has a combat fore stock pistol grip. The stock has embossed Malaysian manufacturer & AUG model detail. Calibre ‘5.56/9’ is on the barrel. The rifle is number M15655 and has other un-matching numbers. Deactivated to UK/EU specification in 2020 the rifle’s slide moves and locks back and the trigger moves. The magazine can also be removed. The price includes UK/EU deactivation certificate and UK delivery. Sn 18261
£895.00...Read full description
CategoryRifles
SubcategorySemi-Auto
ConditionUsed
Price£ 895
Sale typeTrade
MakeAustrian Steyr Licenced Malaysian SME Ordnance Company (SMEO)
Calibre5.56 mm
ModelAUG A1
Manufactured Year1990's
MechanismDeactivated
Barrel length20"
Your referencesn 18261
Gun StatusDeactivated
Recommended UsageCollection item

In our community section
More about this: The Marocchi Evo Shotgun