Next to BSA's break barrel Meteor and better Mercury was the tap loading Airsporter; a fixed barrel underlever with many versions or marks released over the decades. Like the Mercury, this had the trademark alloy Back Block - a sloping trigger block with integral swept back trigger guard and a short under lever finishing flush with the stock, gave the Airsporter a unique sporty firearm profile. This and the Mercury got posher versions in walnut with some minor improvements, then later in 1982 a special edition was released celebrating the company or more correctly it's Piled Arms logo. This was the BSA Centenary, an Airsporter variant in a longer ¾ length walnut sporter stock with a rosewood cap to the end. Okay it was just a fancy looking Airsporter, but as it was limited to only 1000 units and came with a special bundle of accessories, it was very popular with BSA collectors if not BSA users.

Two key points to note were it's fully recessed under lever and that longer stock with the tip detail. Somebody came up with the idea of shortening the barrel and the iconic Airsporter Stutzen was born 4 years later. 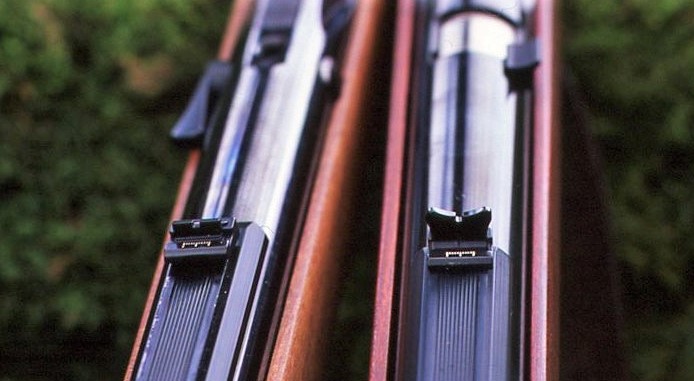 Described by BSA on the owners sheet as the Airsporter 'S' Stutzen, this had a short barrel of about 14” long ending flush with the stock which was finished with a similar rosewood tip. This emulated the continental Stutzen style of stock with its carved end known as a schnable tip as seen on the CF2 Stutzen which BSA made in a number of cartridge calibres. With such distinctive styling there was nothing to touch it.

The hidden under lever with a scallop cut into the wood for finger access was released by a sprung plastic tipped latch. Incidentally apart from some spacers, this is the only plastic to be found on the Stutzen. The action was fitted to the stock with two invisible fixings; the usual bolt inside the grip threading into the block and a special front fixing. This was a combination of a blued steel barrel band with threaded nut matched to a long bolt machined with a sling eye. Those clean stock lines with no visible fixings, the schnabel tip and hidden under lever all made for a beautiful looking airgun at a time when people were swayed by errmm… Relum Tornados. This was a time when most people drove Minis and Escorts but dreamed of Lotus Esprits.

For such a salubrious design, walnut was never offered even as an option. The beech stock came in an exceptional coloured finish resembling traditional English Walnut and from a distance has been known to fool some people.

The scope rail was an alloy plate shoe-horned into slots on the cylinder over two rubber strips. References exist to this being called a Maxi-Grip rail, but oddly this term wasn’t mentioned on BSA parts schematics. Being sat pushed well forward by that trigger block meant choosing a scope and mount combo with added care or using reach back mounts to compensate.

Open sights finished the package – sometimes as they were often optional. A contemporary BSA alloy ramp foresight with its reversible and height adjustable element, with a steel hood was matched to an oddity at the rear. There was nowhere to put a rear sight but BSA managed it in a special way. This was a small alloy unit that was secured to machined grooves on the sloping face of the scope rail. The unit's blade was adjustable for windage only. In repositioning the sight there was minimal vertical adjustment due to the size of the footing. Instead, a dedicated rear blade in different heights specific to each calibre was provided. In conjunction with the adjustable front sight this provided a working solution.

This sight unit was made by Williams in the US from their WGOS range in an alloy so well finished it looks like steel and has fooled a few - including this author. A similar unit had been used on the Crosman Model 1 pneumatic air rifle which was already selling in the UK. For the Stutzen, only the upper part of what was actually a two part sight was used, as the large matching base was discarded in favour of the front of the scope rail.

This Stutzen was available in .177 and .22 only with the prefix of ET and GR in each calibre. There was no .25 calibre option although it was a totally feasible idea as Manchester Airguns had been experimenting with .25 on BSA's. Soon BSA would be involved with the Cobra Strike, a reworked Mercury in .25 supplied to Cobra Arms which was an off-shoot of pellet makers L.J. Cammell in Liverpool and the so-called first production .25 air rifle since the War.

Some idiosyncrasies can be noted. It's a stiff gun to cock which, along with its price tag, made this an adult's airgun. There was no safety or anti bear trap mechanism and there was no easy way to fit a silencer when far cheaper guns of the time could. However, it soon developed its own following and even without a big adjustable sight or a silencer the tap load Stutzen held on. It’s been a belief that it and specifically the .177 option were made for a very short time. If true, whilst factory machining time may have been allotted for a specific period, there would’ve been many guns sold for some time after, when BSA had by this period decided to look at upgrading the entire range and especially the loading system that had been in use since the early 1900's. They opted for a new design known as the RB2 Rolling Breech which was - if memory serves right - first seen on their new Superstar released only a few years later at the turn of the decade. Finally the Airsporter line got the same treatment and the Stutzen RB2 was born. 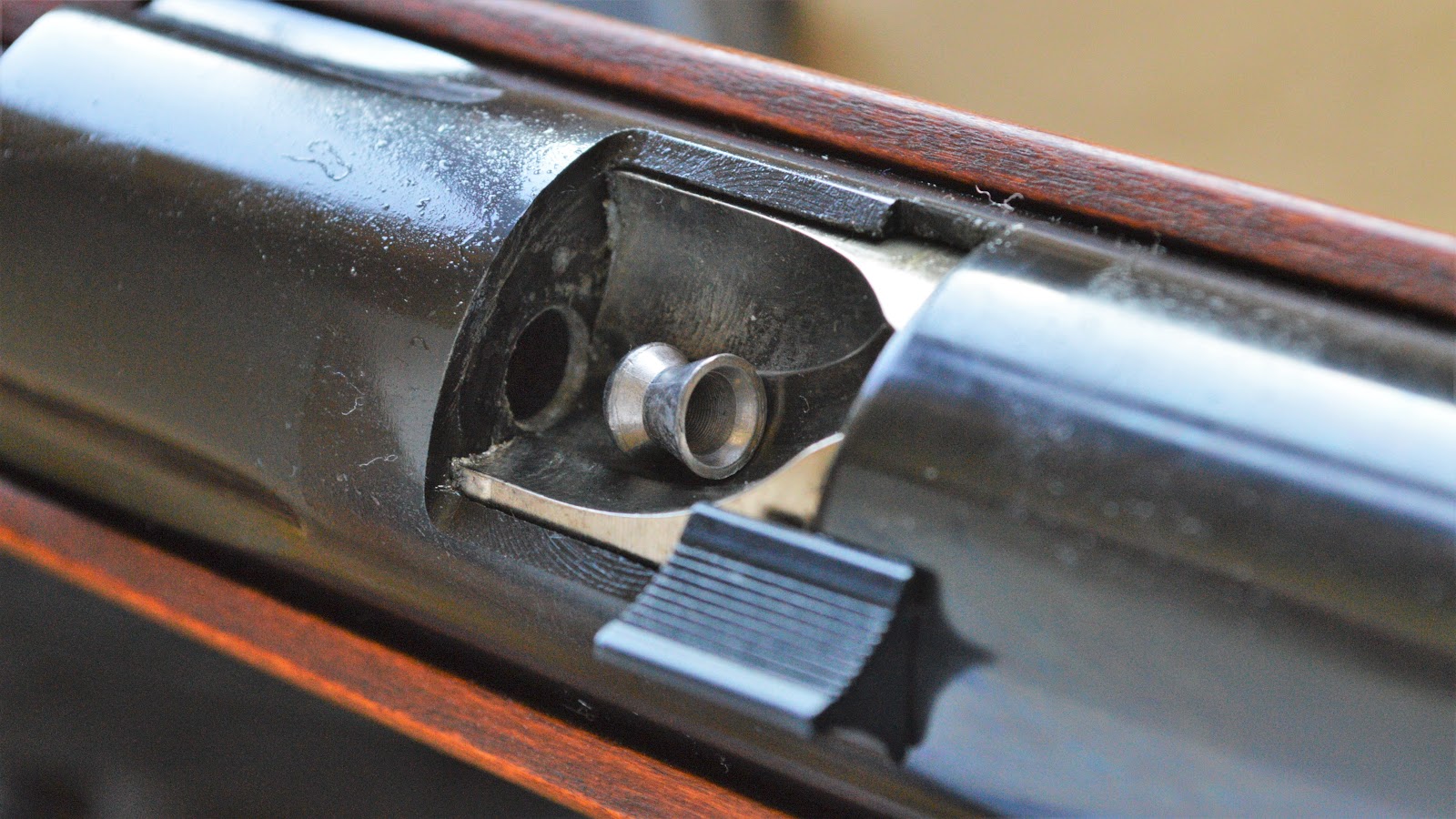 The RB2 breech rotated inside the chamber around the boreline, not across it as with the old tap plug and was given an added O ring seal. The cylinder also increased in size and length giving the new Stutzen a minor power boost. To prevent damage especially to the new seal, it was stipulated that the breech couldn’t be opened until after cocking when pressure from the piston was eased off it. Replacing seals today should be easy, but that scope rail with grippy rubber mounts can make this simple job a chore.

With the chamber longer to keep things in proportion, the barrel was shortened to approx 13”. The new Stutzen serial numbers had WT prefixing the .177 versions and ZT for the .22 calibre; each again having a dedicated sight blade for each calibre listed on the parts list. Bizarrely, the old tap load .22 rear blade was now listed as the new RB2's .177 blade, with another new version now for .22.

With more metal to hide, the RB2 stock lost some sleekness compared to the first Stutzen. The new Stutzen still had the same painted alloy Back Block unit with it's trigger guard, all prone to the same scuffing. Beech was again the only wood used for the new Stutzen, a real shame and the finish tended to be lighter than that seen on the first model. However two very important changes occurred. A new Safety Button was provided to the roof of the sloping trigger block, easy to thumb when on aim. Also the 6.35/.25 calibre was added. After the Cobra Strike venture BSA had taken to the rediscovered old calibre with gusto. 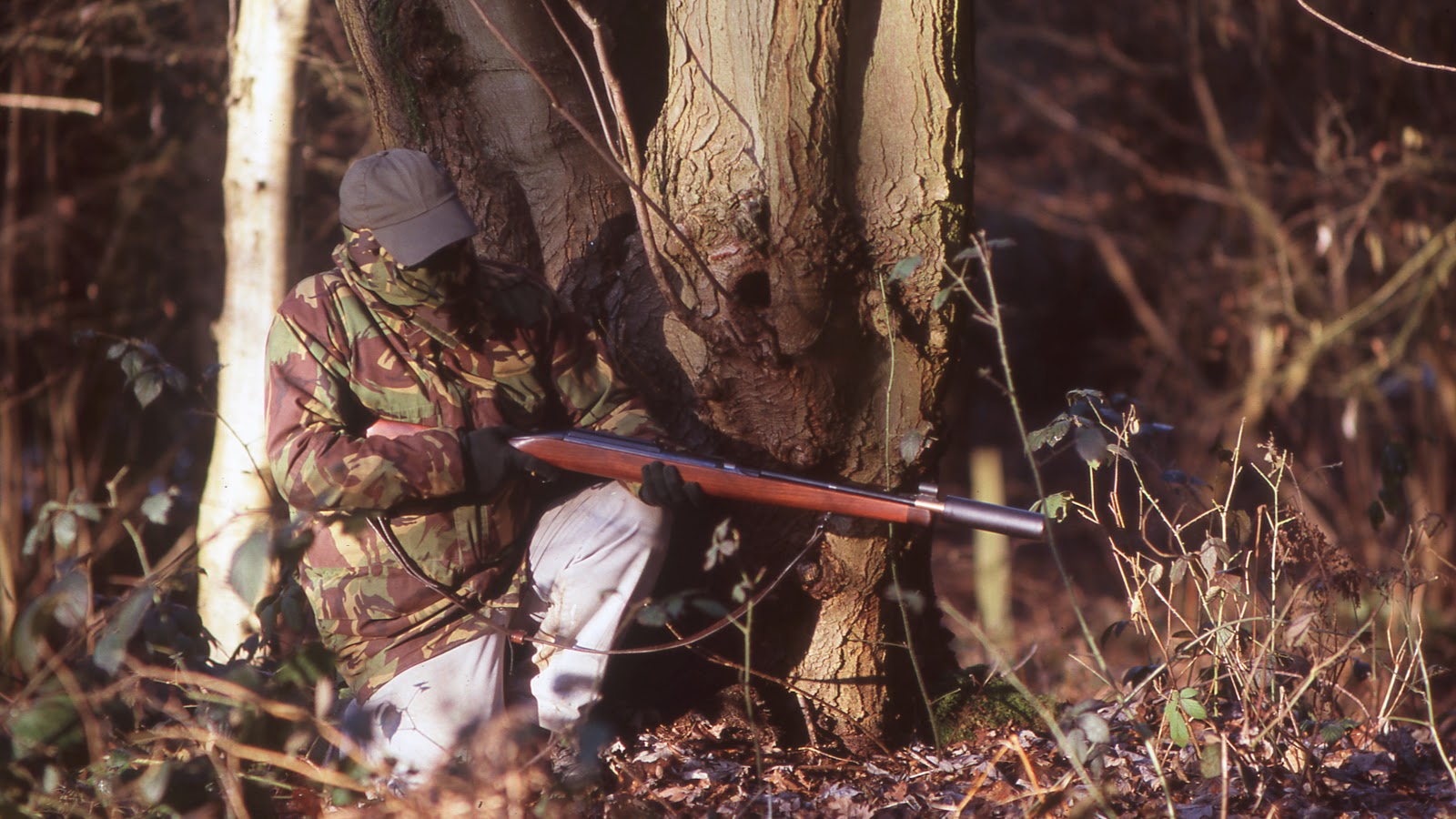 The schematic and parts diagram for the new Stutzen RB2, now dropping the previous 'S'  tag in the owners sheet however does not show .25 parts listed on any seen by this author. There’s no .25 Breech Block, barrel nor a third dedicated Williams .25 rear sight blade listed. The .25 here was fitted from new with it's much taller blade than those fitted to either .177 or .22 versions. Of interest .25 barrels are strangely not marked with the calibre's reference, but only the BSA logo and serial number. All .25 calibre serial numbers start with the .177 code of WT but are prefixed by an additional letter A stamped out of alignment as on 'A WT 01014' here. 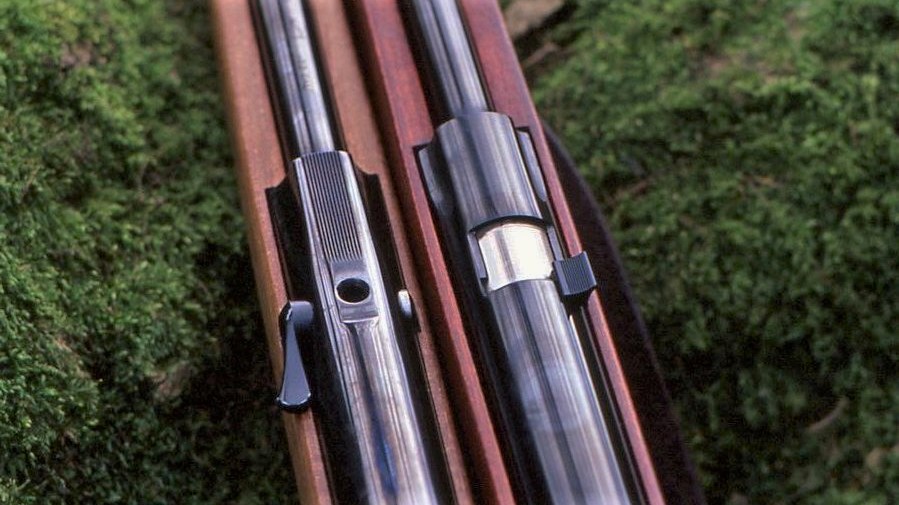 Today any Stutzen are difficult to find whether the 1980's tap loader or the 1990's RB2. Most encountered will be the first model in .22 with .177 being seen less. The later RB2 version is scarce in all calibres with the .25 bordering on mythical as very few appear to have been released. Enquiring about the .25 option many years later, it was found that even some specialist airgun dealers were totally unaware of its existence, and it may have been obtained to special order only. The .25 Stutzen RB2 has to be considered as one of the rarest of modern classic British air rifles.

Many consider the slow FPS .25/6.35 a poor performer based usually on third hand hearsay rather than actual experience. Within the power range allowed for licence free airgunning in practice the calibre is a stunning performer. With open sights and that tall .25 dedicated blade some informal plinking at a measured 40 metres revealed the true potential of the .25 RB2 Stutzen for some more serious shooting. 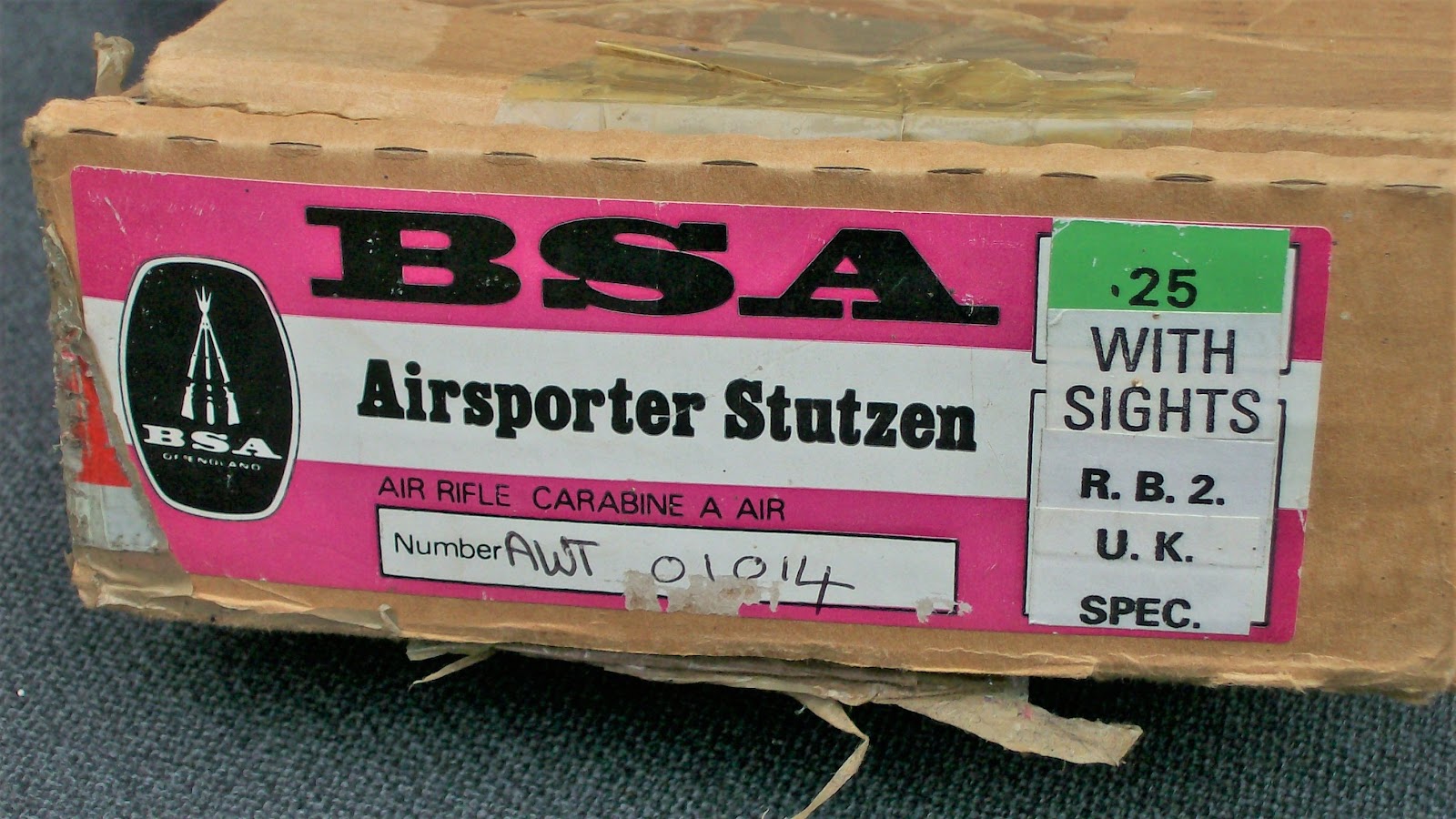 (Many stickers for options , this one the full monty)

It’s unclear when production finally stopped and when units ceased to leave the factory  - the two dates may differ considerably. Some records claim that the second Stutzen lasted only 8 years ending in 2000. Circa 2003 sat in a hospital bed reading gun magazines after an operation as one does, they were still being advertised in all calibre options including the elusive .25. Some went to the USA with importation eased, possibly by the addition of that new safety mechanism. These may have been renamed as a colleague there showed one .25 with a clear adhesive label placed to the cylinder reading in white letters 'Magnum' from memory. Very late into the decade unsold stock could still be found in gun shops here. Allegedly, some units of unknown origin appeared with slightly longer barrels. Defeating the Stutzen look entirely, one small benefit was possibly making it easier to fit a slip-on silencer rather than making a custom adapter as shown here.

Incidentally the 2 styles of stock and action aren’t really interchangeable. A slender short tap action should fit into a longer RB2 stock with gaps to the front of the cylinder area, but trying to fit a longer RB2 action into a slender tap actioned stock will likely end in firewood.

The BSA Airsporter Stutzen in either model is a very unique piece of British airgunning history. A pure hunting airgun powerful enough in any model to take vermin and small game with snag free open sights and a stunning profile. For the spring gun user or collector, they’re a totally superb air rifle and too good to be left sat unused in a cabinet.