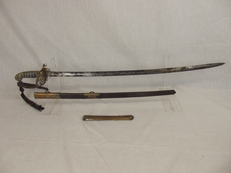 
The ricasso is marked for Buckmaster, 3, New Burlington Street, London on the ricasso with a proof star to the other side.

The scabbard is named to a C. J. M. of the 1st Kings Own Stafford Militia.

It comes with its scabbard and sword knot.

The 1822 dress regulations mandated the introduction of a new sword, to replace the 1803 flank officer's sabre and the spadroon bladed 1796 line infantry officer's sword.

The sword featured a slightly curved blade of what was known as the 'pipe-back' design, a cross-section sometimes referred to as 'key-hole' shape in Victorian sources. This consisted of a flat, un-fullered, single edged blade with a nearly straight rod running along the back of the blade, with a 'false-edge' being formed on the back edge near to the tip, sometimes described as a 'quill-point'. This style of blade seems to have been the innovation of the maker Prosser of Charing Cross, London, and first appeared on 1796 light cavalry style blades from around 1810–1815. This cross-section was then translated to the new narrower 1822 infantry officers' sword. The 1822 blades generally featured acid etched decoration showing the monarch's monogram and other devices. The pipe-backed blade is very light for its size and has a very fine edge.

The gilded brass, 'half-basket' hilt featured the characteristic Gothic outline, with the monarch's monogram formed in the guard. The hilt had an ornate one piece pommel and 'backstrap' enclosing the end and back of the grip, held in place by a ribbed brass ring at the top of the grip and a tang nut or peened rivet at the end of the pommel. The inside section of the guard folded on a hinge towards the blade, to allow the sword to rest easily against the wearer's side when worn. The wooden grip was covered in shark skin, known as shagreen, to give a textured surface for a secure grip, and this was wrapped with brass, copper or silver twist-wire in the recesses of the ribbed grip.

Although the pipe/rod reinforcing at the back edge of the blade was intended to add rigidity for the thrust and strength/mass for the cut, the blade was rather flexible and light at the centre of percussion when made in the infantry sword size. The half basket guard gave better protection to the hand than its predecessor, the 1796 pattern, however the brass could be fragile on some examples, as illustrated by many surviving examples having damage or repairs. Later in the 19th century, it was noted in many articles on British military swords (including the lecture of John Latham of Wilkinson swordmakers in 1862) that these brass guards were vulnerable to hard blows from strong cutting swords such as Indian tulwars.

The sword has quite bit of corrosion to the blade. The grips are complete and still tightly bound. The guard is decent with the flap working correctly. The scabbards tip is detached from the leather.