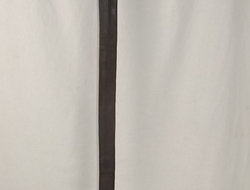 
Here we have a fascinating sword, one of the earlier patterns of mass manufactured patterned swords in Europe.

This sword is distinctive for having a double shell guard (with a slightly larger shell on the right hand side suggesting a right handed orientation) a knucklebow and finger rings alongside a grip just large enough to accommodate a large hand.

This is a cut and thrust blade that was designed to be sturdy and functional. The blade is rather long compared to some other contemporary cavalry swords and built almost like a hefty rapier or a long broadsword blade, sharpened to the shell guard and the ricasso hidden under the guard.

The sword is etched with ‘Enrique Coel’ and ‘En Alemania’, this is very interesting because this sword has been manufactured in Germany (Alemania is Spanish for Germany) and Enrique Coel appears to be Heinrich Koel, a sword maker I believe is from Solingen. There appears to be an armoury or garrison mark on the ricasso.

This sword is in incredible shape and even has retained some of its edge. From the very light edge damage I have no doubt this sword was used and cared for.

The sword still has its scabbard but it is missing its metal parts.

There is some blackening and surface rust to the sword but otherwise it is in good condition.

The scabbard is missing its end and throat.