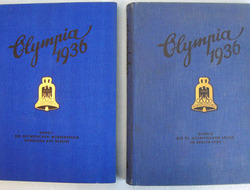 
These books were issued by Cigaretten-Bilderdienst, Hamburg-Bahrenfeld and are packed with black and white and colour photographs of both the winter and summer Olympic Games. (The famous 1936 Jesse Owens Games). Owens specialised in the sprints and the long jump and was recognised in his lifetime as "perhaps the greatest and most famous athlete in track and field history". His achievement of setting three world records and tying another in less than an hour at the 1935 Big Ten track meet in Ann Arbor, Michigan, has been called ‘the greatest 45 minutes ever in sport’ and has never been equaled. At the 1936 Summer Olympics in Berlin, Germany, Owens won international fame with four gold medals: 100 meters, 200 meters, long jump, and 4 × 100 meter relay. He was the most successful athlete at the games and as such has been credited with "single-handedly crushing Hitler's myth of Aryan supremacy". The text is in Geman but the photographs and artwork are superb. The books are complete and in excellent condition. The books measure 12" x 10". The price includes delivery. BO 127
£195.00 ...Read full description
CategoryAccessories
SubcategoryOther Accessories
ConditionUsed
Price£ 195
Sale typeTrade
Your referenceBO 127
Recommended UsageCollection item