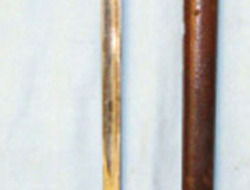 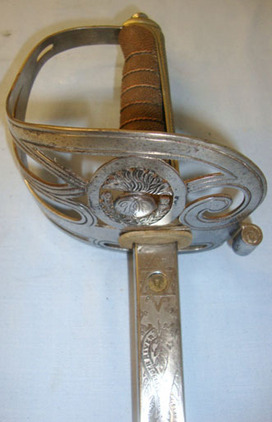 The Grenadier Guards are an Infantry Regiment of the British Army. It is the most senior Regiment of the Guards Division and, as such, is the most senior Regiment of Infantry. The Regiment served in all Major conflicts involving the British Empire and fought in all significant battles of WW1 including Loos, the Somme, Cambrai, Arras and the Hindenburg Line. Seven members of the Regiment received the Victoria Cross during the Great War. This is an attractive original, Grenadier Guards 'Walking Out' Infantry Levee Sword. The sword has a 32 ¾” single edged blade with partial fuller (39" overall). The slim blade is clean and beautifully etched with stylised Royal Cypher ER or GR (Edward or George Rex) and Kings Crown. It has foliate decorative panels on both sides which incorporate all of the Regiments pre WW1 battle honours and one side has a central panel with initials ‘A.G.F.’ no doubt the initials of the Grenadier Guard Officer who owned this sword. The ricasso is marked with the ordnance quality inspection star and inlaid roundel and the reverse with the ‘E. Smith 5 Boyle St, Saville Row W’ (London), manufacturer's name and address. The back of the blade is marked 'London Made'. The blade is fitted with original leather washer. The 1827 Pattern hilt (see page 174 of World Swords By Withers) has a voided full knuckle guard incorporating the ignited Grenade Regimental Insignia of the Grenadier Guards’. The Grenade is engraved with stylised monogram. It has a stepped pommel and Its fish skin grip with wire binding is in excellent condition. The leather bound wood scabbard has a German Silver throat fitting and hanging strap with eyelets. The leather has some scuffs consistent with age and use but all stitching is intact. Price includes UK delivery. Sn 12064