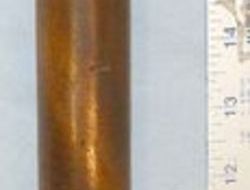 George III (George William Frederick; 4 June 1738 – 29 January 1820) was King of Great Britain from 25 October 1760 until 29th January 1820. The tip staff is one of the earliest forms of Police authority, carried by the early Constables/ Watchmen and Magistrates as signs of their authority and right to enforce law. This original George III Police/ Magistrate’s Staff is made from heavy wood. The decoration at the top of the staff has The King’s Crown with George III ‘GIIIR’ Royal Cypher. The decoration at the bottom end of the staff is decorated ‘Brechin’ (A Burgh of Scotland). All of the staff’s original Red, Gold and Black colouring retain their vivid colour. The cylinder shaped staff measures 24” in length with a diameter of 1 ½”. The staff is holed for lanyard. The price includes UK delivery. Sn 11128