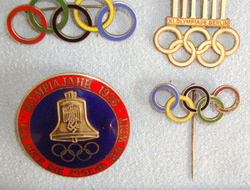 
The 1936 Summer Olympics (German: Olympische Sommerspiele 1936), officially known as the Games of the XI Olympiad, was held in 1936 in Berlin, Nazi Germany. Hitler attempted to use the games to promote the Nazi dogma of Aryan ethnic supremacy. To celebrate the event Nazi German manufacturers produced souvenirs including enamelled pin badges. This is a collection of 4 original Nazi German enamelled 1936 Olympic pin badges. The badges have their original pins which function as they should. 2 of the badges are the combined rings emblem of the Olympic games in white metal enamelled in blue, yellow,black, green and red. One measures 1 ¾” width and has a pin clasp fastener the other measures 1 ¼” width & has a fixed lapel pin. The rear of both are stamped with the Nazi quality inspection mark ‘Ges Gesch’. The largest badge is circular and is 1 ½” diameter. Made of heavy brass it is enamelled with purple, red and gold. It features an embossed representation of the Olympic bell which was at the time of the games in the Bell Tower, Berlin. As with the original bell in the tower, the bell on the badge has the Nazi Eagle with Swastika. The bell surmounts the combined rings Olympic emblem in gold. The red outer edge of the badge has lettering ‘Olympiajahr 1936 Ich Rufe Die Jugend Der Welt’ (English- Olympic games 1936 I Call The Youth Of The World). The rear of the badge has the correct hinged pin clasp fastener. The badge is also stamped by the manufacturer mark ‘GTD’. The final metal badge is enamelled in white and gold and depicts the front elevation of the Reichstag building surmounted by Nazi Eagle and lettering ‘1936 XI Olympiade Berlin’ above the olympic rings emblem. The badge is 1 ½” width and the rear has a small hinged pin clasp fastener. The rear of the badge has the Nazi quality inspection mark ‘Ges Gesch’. Price for this nice original collection of Nazi pin badges from a controversial event in history includes UK delivery. Sn 12974:21
£275.00...Read full description
CategoryAccessories
SubcategoryOther Accessories
ConditionUsed
Price£ 275
Sale typeTrade
Manufactured Year1936
Your reference12972:21
Recommended UsageCollection item