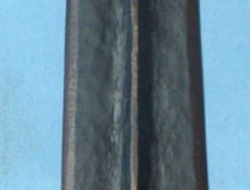 Early 1900's African Masai Lion stabbing spear with 54cm long steel leaf shaped blade (73" overall length) weighing 1.9 kg. A spear is a pole weapon used for stabbing with iron or fire-hardened tip. The use of various types of the spear was widespread all over Africa and it was the most common weapon used before the introduction of firearms. The Zulu and other Nguni tribes of South Africa were renowned for their use of the spear. The spear was not only the most commonest weapon in Africa but was also used as a form of currency, tribes smelting iron spear heads traded the spear heads to their less skilful neighbours. This weapon has a 54 mm (21 1/4") long blade with a medial ridge along it's length, it is 33" including the socket for the haft. It has a short central 6" visible haft and a further iron 33" stabbing pike butt. The iron blade and spike are 'forced fit' onto the haft. The haft is plain hard wood and has been hand worked with a linear pattern. This is a very nice example. (See 'A Glossary of the Construction, Decoration and Use of Arms and Armour in all Countries and in All Times' book by George Cameron Stone, Pages 572-573). The price includes UK delivery. Sn 13653