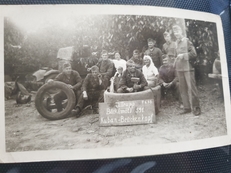 An Exceptional WW2 Collection Of German Armed Forces in Action

~ An Exceptional WW2 Collection of German Armed Forces in Action ~


This is an astonishing selection of German armed forces in action during the Second World War. Please mind the fact that the pictures presented in this listing are just a selection of the actual album.

The collection comprises of the following sections:

Depicting both ordinary pilots and commanders manning various types of airplanes, from medical and reconnaissance ones to transport airplanes, sea-rescue airplanes and fighters. Some pictures depict pilots being rescued at sea, airplanes being recovered after a crash or shut down enemy planes. Some Condor legion pictures can be seen as well.

A nice selection of the famous German paratroopers operating
on the Eastern Front;

They are presented manning the Anti-aircraft machine guns or being deployed in squads on the front lines. The variety of machine guns used spans from the MG 08, 13, 15, 34, to Zb vz. 26, presenting all types used by the German armed forces on AA mountings, on heavy tripods or on the move, without tripods.

A very interesting picture from the beginning of this section depicts a soldier using the less known Luftwaffe double barrel shotgun. A rare picture indeed.

Most of these pictures are from the Russian campaign. The pictures seem to follow mostly the evolution of Army Group A in the Caucasus and Kuban peninsula in 1942-1943.

A various numbers of vehicles can be seen in the pictures, including amphibious one. Also there are some pictures with the soviet prisoners of war and destroyed armoured vehicles on both sides.

There is a significant emphases placed on crossing rivers and German made bridges.

An excellent selection of scout vehicles is presented in a series of photographys being mixed with various other armoured vehicles, some of them rarely seen in the war records. Some Soviet tanks show up as well in some splendid pictures from the Caucasus.

The most famous army corps of the war is also represented in this collection. Men and vehicle are depicted together in the desert.

A Red Cross prisoner of war card send to Germany in December 1944 reveals the identity of one of the soldiers we see in these pictures.

Unloading armoured vehicles from ships indicates that the images can be from the port of Tripoli.

The Signal Corps and Artillery

The selection ends with a variety of pictures of the Signal Corps men on motorcycles and tracked artillery on the Eastern front. Various large calibre guns are shown in action.

The album comprises of 214 pictures plus various post stamps.
It is 18 cm tall by 23 cm wide.

For international postage please contact us via the messaging service and we will post tracked at cost....Read full description
CategoryAccessories
SubcategoryOther Accessories
ConditionUsed
Price£ 650
Sale typeTrade

In our community section
More about this: Gamekeepers are working together this grouse seaso...
Display map