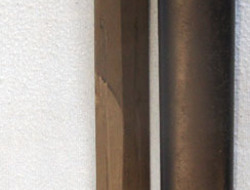 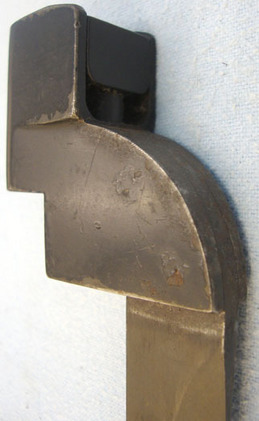 This is a bayonet unique to South Africa. The socket is virtually identical to the British No.9 bayonet but with a blade from the UZI SMG. According to Skennerton these bayonets were made to fit No.4 rifle, were made in the early 60's by Armscor. They were intended for us by South African Local Defence Force Commandos (see page 370 item 6 of Skennerton’s book British & Commonwealth Bayonets). They were issued in both reinforced fibreglass scabbards and as in the case of our example steel scabbards from UZI bayonets. The bayonet has an excellent clean blackened 6 ¾” single edged blade and pommel with ribbed release button. The scabbard with frog stud has original black paint and no dents. These bayonets are not commonly found on the collectors market. Price includes UK delivery. BAYO 254