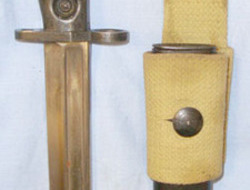 
The L1A1 Bayonet was introduced into Service in the 1957 for the 7.62mm L1A1 Self Loading Rifle (SLR). This is an original example. It has an 8" fullered blade with Bowie type tip. This early example has the locking stud protruding from the pommel rather than recessed as found in later L1A3 models which were introduced just a year later in 1958 (The locking stud was modified due to the risk of easy removal by civilian combatants during riots or other civil disturbances). The short production time of the L1A1 bayonet makes this weapon a very rare and sought after piece. The grips are correctly marked 'L1A1' and with Stores number '960-0011' together with 'B' mark. It is complete with it's original steel scabbard and green webbing frog with single belt loop. The rear of the frog has uneadable ink lettering. Price includes UK delivery. Sn 9686
£495
...Read full description
CategoryBlades
SubcategoryBayonets
ConditionUsed
Price£ 495
Sale typeTrade
Your reference9686
Recommended UsageCollection item