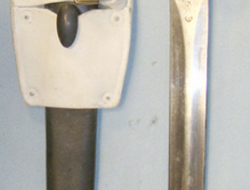 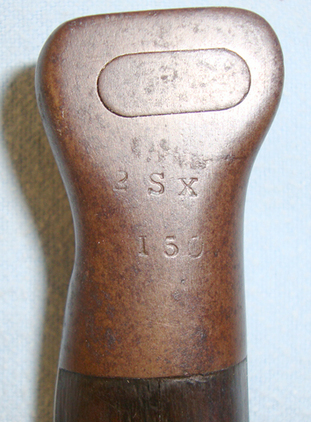 The 2nd Battalion of the British Sussex Regiment, was part of the Black Mountain Expedition of 1888, as one of many battles fought along the North-West Frontier Province. The 1st 2nd & 3rd Battalions of the Regiment saw active service in the Boer Wars.The 2nd Battalion crossed the channel with the British Expeditionary Force in 1914 and fought through the war on the Western Front. It was during the first Battle of Ypres that the 2nd Battalion was given the unofficial title "The Iron Regiment" as an unsolicited testimonial by German prisoners captured on 1 November 1914. The Enfield, Lee Metford, P1888 Bayonet was manufactured for the British .303 calibre Enfield, Lee Metford Rifle which were issued to British and allied forces during the Boer war and WW1. This is an excellent example to the 2nd Batt Sussex Regiment. The Bayonet blade which is in good clean condition with original polish, is 12" in length, double edged and unfullered with a medial ridge running from the ricasso to the blade tip. The ricasso of the blade is dated '4 '98' (April 1898). The VR and 'Flat Top' Crown ( Victoria Regina) are crisp. The reverse is nicely stamped with Enfield 'EFD' inspection marks and War Department Arrow. The pommel is marked '2 SX' to the 2nd Battalion The Sussex Regiment together with number '136'. This nice condition Bayonet comes complete with excellent leather, steel mounted leather scabbard and Buff leather frog which are in excellent condition and have all stitching intact. It has a large single belt loop and is buckle fastening. The rear of the frog is ink stamped with various letters and numbers & the name 'Wilson'. Price for this Regiment marked piece includes UK delivery. Sn 9209.