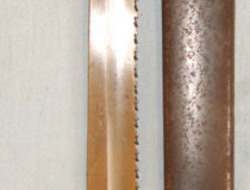 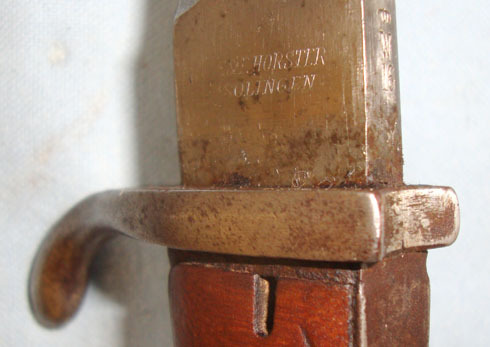 A WW1 Imperial Prussian G98 saw back butcher bayonet and scabbard. This is the S98/05 new version with steel flash guard added after September 1915 (see ‘German Bayonets The Models 98/02 & 98/05’ by Carter). The bayonet has a 14 ½” saw back butcher blade. The ricasso is faintly stamped by the manufacturer 'E & F Horster Solingen'. Although Horster was a large producer of the S98/05 from 1915-1918 they only produced the saw back version in late 1915 and most of 1916. The back of the blade is stamped 'Crown W' & dated '16' (1916) denoting Prussian ownership and manufacture in 1916. The blade has some light staining consistent with age but no rust. The bayonet has a steel swept quillon, correct 9 groove dark wood grips & steel pommel with 2 small inspection marks. It is complete with original all steel scabbard. These scabbards were introduced in 1915. The scabbard has a steel locket and ball end. The ball end and the body of the scabbard near to the throat have small Imperial inspection marks. The scabbard has even patina and no dents. Price includes UK delivery. BAYO 228