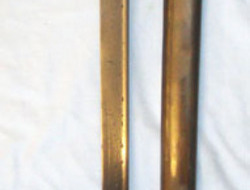 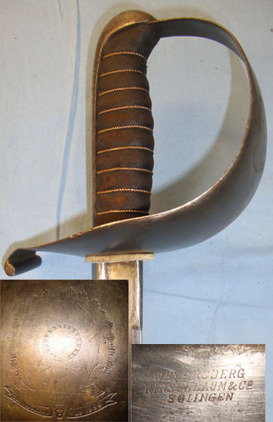 On November 15, 1889 Marshal Deodoro da Fonseca deposed Emperor Dom Pedro II, declared Brazil a republic, and reorganized the Government. From 1889 to 1930, the Government was a constitutional democracy, but democracy was nominal. Immediately after the Republic was established Imperial German arms manufacturers supplied Brazil with arms and equipment to bolster the new regime's military. The Republic ended in 1930 with a military coup, also known as the Brazilian Revolution of 1930 that installed Getúlio Vargas as a dictator. This is an excellent original, Brazilian Republic Heavy Cavalry Troopers Sword & Scabbard made in Germany C1900. The Sword’s 32” pipeback blade has some areas of light staining and pitting but no rust. The blade is fitted with original leather hilt washer. The sword measures 38” overall length. The full steel knuckle bow is faintly marked with the Brazilian Republic Crest with 5 pointed star and banner ‘15 De Novembro De 1889’ commemorating the establishment of the Republic (illustrated). A sword with a similar crest is illustrated on page 142 of World Swords by Withers. The blade is marked by the German manufacturer ‘Weyersberg Kirschbaum & Co Solingen’ (illustrated) and the back of the blade has a small 5 pointed star Brazilian Republic inspection mark. Its leather covered wood hilt is wire bound. The hilt has service wear but the wire binding is tight and intact. It is complete with its original steel scabbard with single hanging ring. The scabbard has even patina throughout and just a few minor dents consistent with age and service use. Price includes UK delivery. Sn 12555:4