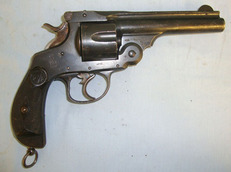 
**This Firearm is deactivated to one of the pre- 2nd May 2017, UK specifications. As such it can only be sold and exported in its present state to customers in NON- EU countries including the Isle of Man and Channel Islands. Customers based in the UK & other EU countries can purchase on our lay-away scheme. The weapon will then be brought up to the EU specification and the relevant certificate obtained prior to the transfer of ownership and delivery**. In 1914, with the beginning of the First World War, Gun manufacturers located in the City of Eibar Spain began equipping the French Army with revolvers. At that time Smiths & Wesson’s American patents did not protect their designs in Spain and the Spanish companies produced revolvers identical to S&W Russian Calibre top break and hand ejector type revolvers. In WW1 the British Army faced a shortage of their standard Officer’s issue Webley MK VI revolvers and ordered supplies of the Spanish made large calibre revolvers (see pages 57-58 of Revolvers Of The british Services 1854-1954) . This example of the Spanish made service revolver which is designed using S&W Russian Calibre top break action designs is in very good condition and is of the type issued to British & French Officers during WW1. It has a 5” barrel with top rib which is stamped ‘Manufactura Especial De Revolvers Garate Anitua Y Oia Eibar Espana’. It has military fixed sights and lanyard ring. Finished in blue the right side of the frame is stamped with ‘Manga Registrada’ mark and ‘Hege’. The frame is stamped with serial number ‘109’. The pistol has a colour case hardened hammer & trigger. The barrel block has British proof marks and calibre information (illustrated). It has undamaged chequered panel grips (the grips look short but they are exactly as they should be). Deactivated to UK specification in 2011 the pistol has a ringed cylinder and blocked barrel & it cocks and dry fires in both single & double action. The price includes the deactivation certificate and UK delivery. Sn 17699:5
£725.00...Read full description
CategoryPistol / Hand Guns
SubcategoryRevolver
ConditionUsed
Price£ 725
Sale typeTrade
MakeBritish Officer\'s Issue, Spanish Eibar Arsenal
Calibre.455
Model.455 Calibre 6 Shot Double Action Military Service Revolver (S&W Russian Top Bre
Manufactured YearWW1 Era
CertificateNo Licence
Your reference17699:5
Gun StatusDeactivated
Recommended UsageCollection item