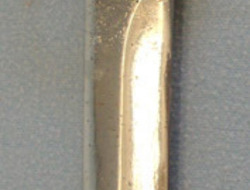 This is a trials bayonet made by F.N. in Belgium and issued by Britain with the then Experimental Belgian Rifle designated the X8E1 by Britain. This was the forerunner of the L1A1 rifle. It is stamped on the tang with "X2 E1 7583". It is serial numbered to the rifle, in this case "7583. The original bayonets had a twin pronged flash hider forward of the muzzle ring but this has been removed on this example. The blade, muzzle ring and pommel have been chrome plated presumably for ceremonial use. The blade has not been shortened as some bayonets sold on after the trials (It still measures 7.9") and we presume this was an official conversion to use up unwanted stocks on the new L1A1 rifle before large quantities of the L1A1 were available.We have not seen one of these before and therefore would class it as a rare variation. (See Skennerton's Bayonet book, pages 256-259). The price includes UK delivery. Bayo 188