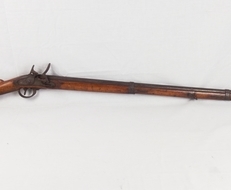 
This is a highly collectable relic from HMS Tricomalee which was presented to Portsmouth City Council on 10 June 1964.

The buttstock bears an informative brass plaque for display purposes.

The musket is not functional anymore

HMS Trincomalee is a Royal Navy Leda-class sailing frigate built shortly after the end of the Napoleonic Wars in indica (1816-1817).

Trincomalee is one of two surviving British frigates of her era—her near-sister HMS Unicorn (of the modified Ledaclass) is now a museum ship in Dundee. After being ordered on 30 October 1812, Trincomalee was built in Bombay, India by the Wadia family [1] of shipwrights in teak, due to oak shortages in Britain as a result of shipbuilding drives for the Napoleonic Wars. The ship was named Trincomalee after the 1782 Battle of Trincomaleeoff the Ceylon (Sri Lanka) port of that name.

Trincomalee was placed in reserve until 1845, when she was re-armed with fewer guns giving greater firepower, had her stern reshaped and was reclassified as a sixth-rate spar-decked corvette.

Trincomalee departed from Portsmouth in 1847 and remained in service for ten years, serving on the North American and West Indies station. During her time, she was to help quell riots in Haiti and stop a threatened invasion of Cuba, and serve on anti-slavery patrol. In 1849, she was despatched to Newfoundland and Labradorbefore being recalled to Britain in 1850. In 1852 she sailed to join the Pacific Squadron on the west coast of America.

Trincomalee finished her Royal Navy service as a training ship, but was placed in reserve again in 1895 and sold for scrap two years later on 19 May 1897. She was then purchased by entrepreneur George Wheatley Cobb, restored, and renamed Foudroyant in honour of HMS Foudroyant, his earlier ship that had been wrecked in 1897.

She remained in service until 1986, after which she was again restored and renamed back to Trincomalee in 1992.

She is now restored as a museum ship in Hartlepool, England.

The firing mechanism is not working anymore and is missing the top fitting from the flint catch (the upper jaw).

It has been varnished at one point in time and some traces are still visible on the barrel.

The metalwork darkened and developed pitting and surface rust in some areas.

The metal plate of the wooden stock but is missing, leaving the timber exposed.

In our community section
More about this: A Guide to Prepping - All the Supplies you need to...
Display map