The weather has been appalling for the past few weeks, and my trigger finger has been twitching for some exercise. I also needed a distraction to get the kids away from their phones and games consoles. Fortunately, I’ve been able to get my hands on a set of Sig Sauer CO2 powered air rifles and during the short dry spells I’ve charged the CO2 powered airguns and ventured out into the rear garden for some tin can plinking with the kids.

First up is the SIG SAUER MCX - the biggest and most intimidating looking CO2-powered air rifle I’ve owned - then the shorter yet equally intimidating MPX. Both rifles are close replicas of the live ammunition firing MCX and MPX currently standard issue ArmaLite Rifle (yes this is what AR stands for, not Automatic Rifle) used by the Navy Seals, and you may not be surprised to learn the CO2 MCX and the MPX versions are manufactured in the same SIG factory in Newington, New Hampshire, USA. 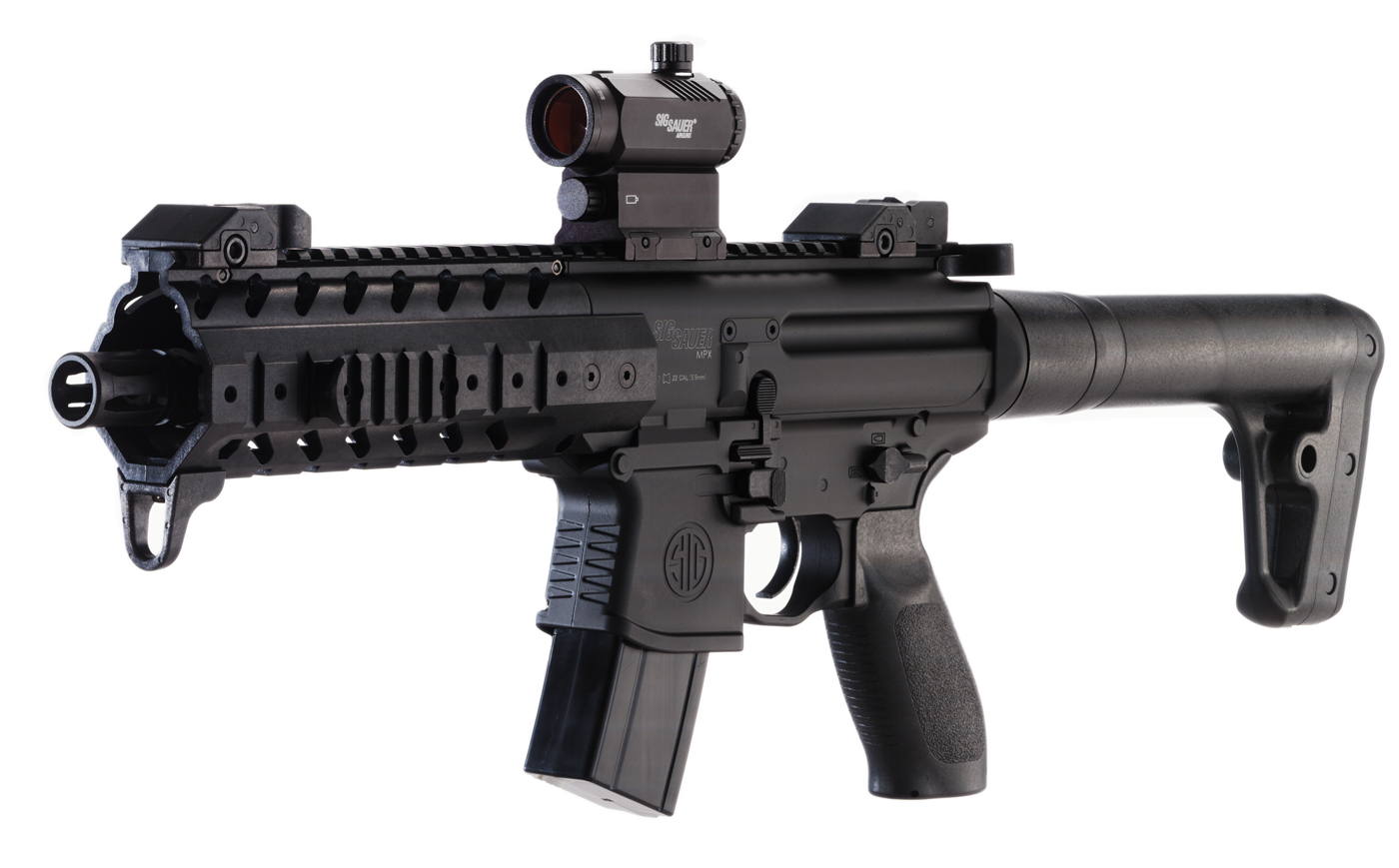 My interest in the SIG Sauer CO2 airguns peaked following the release of the John Wick Trilogy, and I too wanted to take an AR type rifle into the field to have a go at what Keanu Reeves was doing in his YouTube training video. Note to our readers; the link below contains scenes of extreme violence from the movie John Wick, viewer discretion is advised.

The rifles come in a well-presented cardboard box, complete with Styrofoam moulded linings that securely hold the rifles in place. In the box is the rifle, an open sight adjusting key, a plastic magazine with a plastic belt insert that holds the pellets, a pellet seating tool and the instructions.

Straight out of the box I was impressed with the weight of the rifle and after scanning the SIG’s over, the finish appeared almost flawless. There were no unfinished areas or moulded burs that still needed to be removed.

Both rifles are more or less identical in every way, except the MCX has a permanently attached suppressor to the front where the MPX is the shorter version with 1 ½ inch of barrel muzzle protruding from the end.

The rifles are well balanced and carrying and manoeuvring them was easy, whilst shouldering the rifles is also very comfortable. I found the length of pull to be just right too.

The rear stock on both the rifles is made up of a hard-ballistic polymer, again modelled on the real thing. The stock can be removed by pressing a button to one side and pulling it off to reveal the 88gram CO2 connection point on the rear of the receiver. Having attached an 88gram CO2 canister, the stock simply slides back over this and locks into position. Unfortunately, the stock isn’t adjustable in any way but does allow the user to attach a sling. There’s also a rubber recoil pad on the rear of the stock and is a nice touch adding to the realism, considering the rifle has virtually no recoil. The aluminium receiver is a one-piece affair; unlike the real thing that can be split to separate the upper and lower portions, the CO2 model won’t split. The moulded aluminium has the appearance of realistic operating features and is finished perfectly with the brand names and manufacturers details laser etched into it. Above the receiver there’s a long Picatinny rail; fixed to it at both the front and rear locations are some iron flip up sights. Both front and rear sights can be adjusted and the rear sight has the added advantage of being able to change to a large or smaller peephole. The Picatinny rail allows for ample real-estate to mount a scope or red dot sight. In fact, both rifles can be bought with the additional optional red dot sight. I chose to purchase the bare models and mounted my own red dot sights to them. 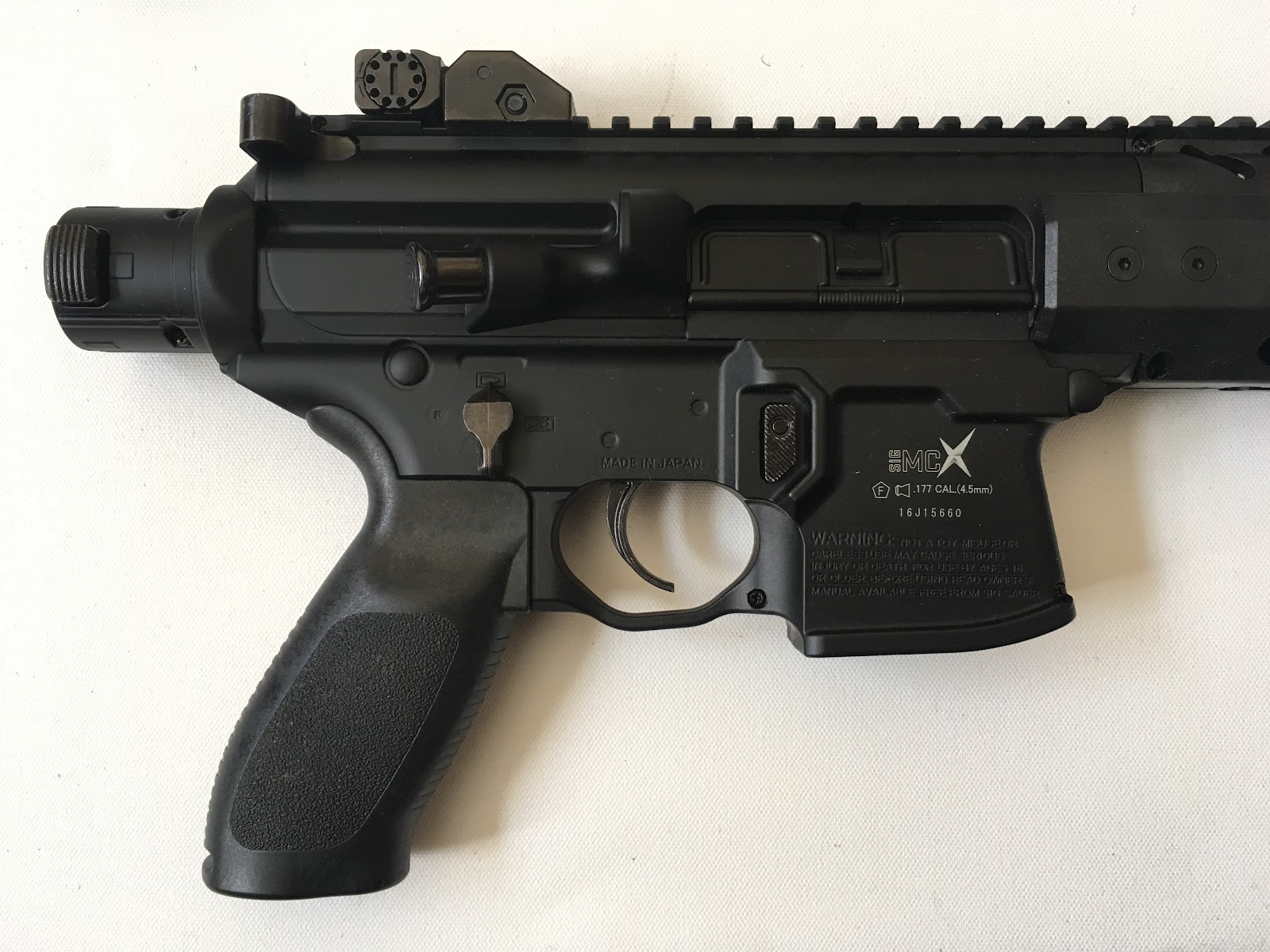 The rifles, although appearing to be fully ambidextrous are not - the firing selector and pull charging handle are but the magazine release can only be pressed in from one side, with a fake fixed button on the other side. The forward load assist is fixed and non-operational and so too is the shell ejector which is moulded into the receiver.

The trigger is two-stage, non-adjustable and is comfortable to operate in double action mode. The first stage offers a long draw then a slight creep before firing. The trigger rattles around but is hardly noticeable set in an amply sized trigger guard.

Behind the trigger is the pistol grip, this too is made from ballistic polymer and has a patch of texture to both sides. The instruction manual states the grip can be changed if the user desires to do so, and can be substituted with most aftermarket AR platform grips.

Forward to the trigger is the magazine chamber. Turning the rifles on their heads allowed me to look into the rifles and I was able to see some of the inner workings. The moulded aluminium appears to be cheap and cheerful yet functional and durable; only time will tell. The magazine chambers have a wide flared port which assists the operator in quickly ejecting and loading during a race shooting competition, and the chamber is grooved to match the grooves on the magazines, thus ensuring the magazines can only be inserted one way and correctly. The magazines don’t fall out when the release button is pressed and instead need to be removed manually. This detracts from the realism and I feel this is partly to do with the lightweight nature of the magazines. 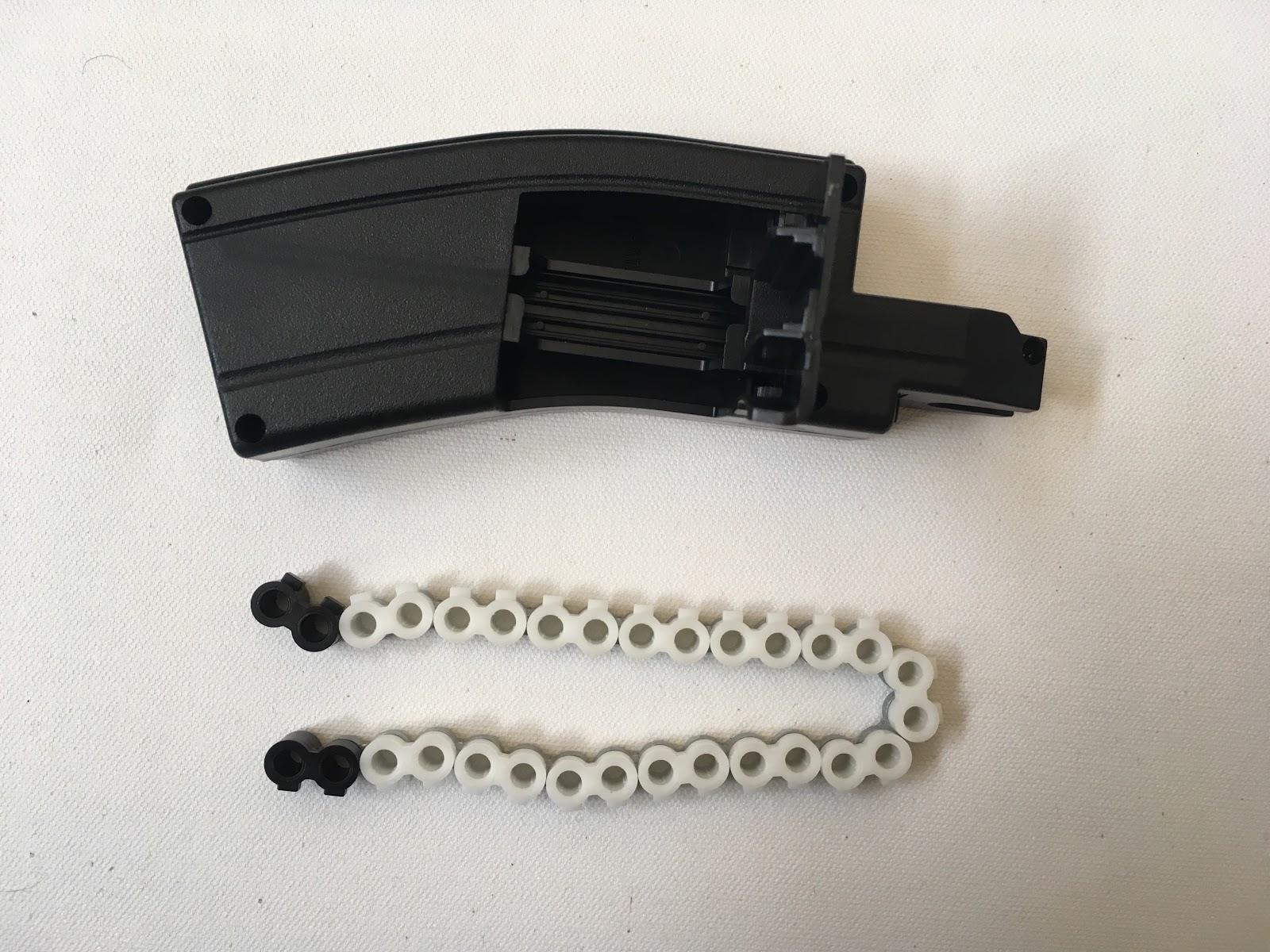 The magazine felt weak and flimsy in my hand. Opening a small door on the magazine allows access to the inside removable 30 round rotary chain or belt type pellet holder, this is also just as weak and flimsy looking. The magazine and pellet chain reminded me of a toy that can be purchased at Poundland or any other pound shop. I’ve since been shocked to learn replacement magazine costs almost £60.00, around a third of the cost of the rifle. I recall thinking ‘this isn't going to last long’. Filling the magazine is easily done and I was using some flat head 4.5mm Geko pellets. I didn’t bother with the pellet seating tool, if I take it out of the box I’ll only be wondering where I left it.

After loading the belt/chain this is re-inserted into the actual magazine in a specific way. The instruction manual clearly states the belt and magazine can be permanently damaged if rotated in a counter-clockwise direction, but me being me I had to test this, and I’m happy to say rotating the belt/chain in a counterclockwise direction did nothing to seriously damage the magazine. In fact I felt no resistance either way as the belts spun freely. Looking at the magazines there are no markings to identify which way is clockwise or counterclockwise or which is the front or rear of the magazine.

In front of the magazine well of both rifles is a ballistic polymer moulded hand guard. This has some nice key style holes and additional Picatinny rails on the top and bottom. The MCX comes with an additional hand grip already attached to the underside rail, where the MPX doesn’t. The MPX, however, comes with some additional Picatinny rails to both the left and right side of the handguard and these compensate for the 2 ½ inches the MPX loses in length. Inside the handguard the barrel can be seen and appears to be free floating. The barrel is nowhere near match accurate so don’t expect to win any FT/HFT competitions with these rifles.

Finally, the MCX has a firmly fixed moderator or suppressor on the front - call it what you will both actually do the same thing. The moderator has a protruding crown on the end and I don’t know if this is a design feature or whether SIG intended the user to bash doors open with it.

I wasn’t too impressed with the power output of the rifles whilst shooting them over the chronograph getting readings between 2–3 ft/lbs, but in the garden at a maximum of 20 yards, the rifles didn’t disappoint. Both rifles obliterating empty soda cans and making their mark on the paper targets. Within an hour my two children and I had managed to empty a new tin of pellets, before having to re-gas the rifles. The rifles will shoot as fast as one can pull the trigger, so having a stockpile of pellets and CO2 is a must - I was able to empty a magazine on average within 10 seconds and faster at times. Surprisingly the rifles performed exceptionally well, there were no misfires and thankfully the magazines remained intact and undamaged, I don’t fancy buying replacements any day soon.

There’s no reason at all why anyone should consider these rifles for anything other than backyard plinking. I managed ten shot, 1 ½ inch centre to centre groups at 20 yards with the factory fitted open sights and 1-inch groups with a zeroed red dot sight. Both groups were done whilst standing. I had to continuously remind myself the MCX and MPX are sub £300 (full set up) rifles and designed for a bit of backyard fun and nothing more.

The rifles proved to be great fun, as that’s all they are: ‘fun guns’. Both my teenage sons enjoyed the weekend in the back garden with them. I was happy, they were happy, what more could a father want? Money well spent.

I do hope SIG SAUER increase the power on the rifles to at least 6 ft/lbs, which would allow me to shoot them at targets set out at greater distances. I don’t think the SIG Sauer MPX or MCX are rifles that’ll remain in my collection unless my children continue to use them, for now I don’t have any other use for them. I also hope SIG make a full auto version, that would be cool.

As always, I hope you enjoyed this article and remember to shoot straight and shoot safe.