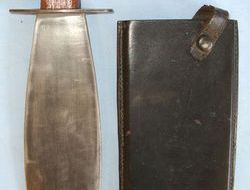 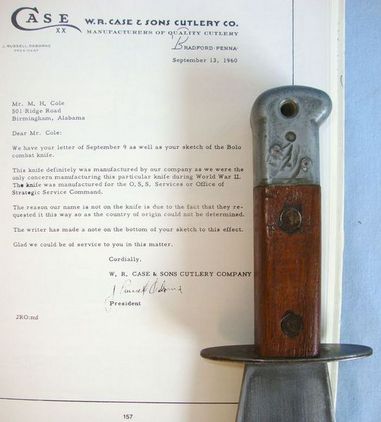 During WW2 the American Company W.R.Case & Sons Cutlery co made smatchets for the American O.S.S. Special Forces who engaged in Espionage and Covert Operations behind enemy lines during the War. The U.S. Government requested that these knives were made without manufacturer or War Dept markings i.e sterile so that the origins of the weapon could not be determined if captured. These weapons are extremely rare. Examples of the O.S.S. Smatchet and scabbard are illustrated on page 156 of the book U.S. Military Knives III by Cole. Page 157 of the same book illustrates a letter from the president of Case Cutlery dated 1960 addressed to the author of the book confirming that Case Cutlery made sterile smatchets during WW2 (illustrated in image 3) . This original example of the O.S.S Smatchet is excellent and undamaged. It has the correct large leaf shaped blade 11” in length (16 1/2" overall) which is riveted to its slab wood grips which are undamaged. It has a large oval steel cross guard and alloy pommel holed for wrist strap. Its scabbard is the correct wood covered leather with heavy duty stitching and rivets. It has a short retaining strap with press stud fastener and the rear has the correct diagonal belt loop (the surface of the belt loop is split but still intact and could easily be repaired). Both the Smatchet and Scabbard are sterile having no manufacturer, Unit or WD marks as described in the previously mentioned letter from Case Cutlery. Price for this WW2 O.S.S. weapon and scabbard rarely seen on the collector's market includes UK delivery. ED 245