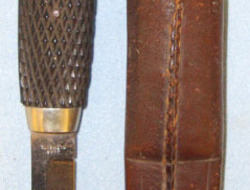 Chas Clements were a long established firm of WW1 era cutlery retailers based in London. Clements made popular private purchase weapons during WW1 including trench daggers & knuckle knives (See pages 19 & 20 of British & Commonwealth Military Knives by Flook). This a is an original WW1 era British Officer’s private purchase trench fighting knife by Clements with its original leather scabbard. It has an ebony handle which has a deep chequered design. The pommel has an exposed brass stud. It has a German Silver ferrule at the hilt and a slim undamaged 4 ¾” single edged, Bowie shaped steel blade, marked ‘Chas Clements’. The knife measures 9 ¾” overall length. Its original brown leather scabbard has belt loop to the rear which also acts as a retaining strap for the knife (an eyelet at the end of the retaining strap fastens to the stud in the pommel of the knife and keeps it securely in the scabbard). A small area of stitching at the throat of the scabbard which forms the lower end of the strap into a belt loop is missing but this could easily be replaced. All leather of the scabbard are intact. Price includes UK delivery. Sn 12519:1