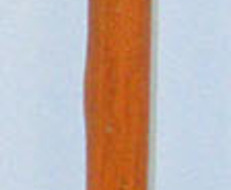 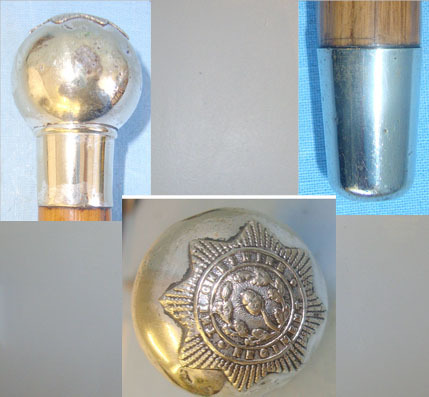 
The Cheshire Regiment was a line infantry regiment of the British Army, part of the Prince of Wales' Division. The 22nd Regiment of Foot was raised by the Duke of Norfolk in 1689 and was able to boast an independent existence of over 300 years. The regiment was expanded in 1881 as part of the Childers Reforms by the linking of the 22nd (Cheshire) Regiment of Foot and the militia and rifle volunteers of Cheshire. The title 22nd (Cheshire) Regiment continued to be used within the regiment. On 1 September 2007, the Cheshire Regiment was merged with the Worcestershire and Sherwood Foresters Regiment (29th/45th Foot) and the Staffordshire Regiment (Prince of Wales's) to form a new large regiment, the Mercian Regiment, becoming the 1st Battalion, Mercian Regiment. The Cheshire Regiment fought with distinction in all major conflicts since their formation. This is an attractive original Officer’s walking / swagger Stick of the Cheshire Regiment made sometime in the early 20th century. The varnished cane stick measures 30 ¼” overall. It has a white metal nickel plated ball top with embossed badge of the Cheshire Regiment and conical nickel plated metal ferrule. The price includes UK delivery. Sn 15342
£175.00 ...Read full description
CategoryBlades
SubcategoryOther Blades
ConditionUsed
Price£ 175
Sale typeTrade
MakeCheshire Regiment Officer’s Cane Walking / Swagger Stick, Nickel Plated Ball Top
Manufactured YearEarly 20th Century
Your reference15342
Recommended UsageCollection item