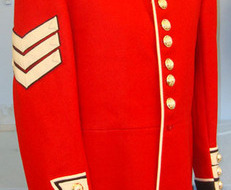 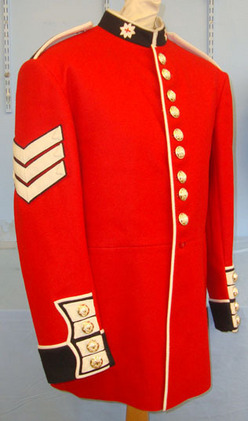 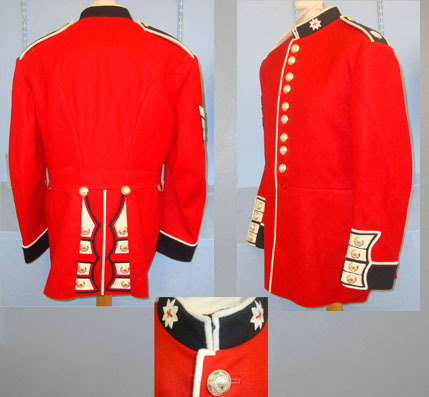 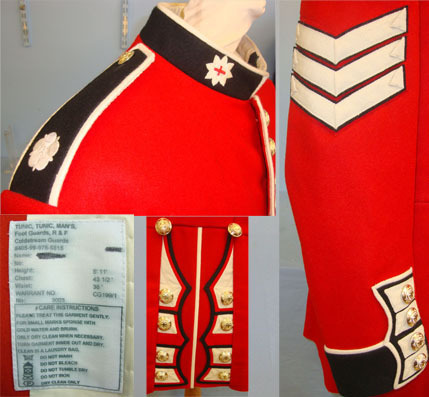 
The Coldstream Guards are one of the 5 Foot Guards Regiments in the British Army Household Division - the personal troops of Her Majesty the Queen. Formed in 1650 as part of the New Model Army during the English Civil War, the Coldstream Guards swore allegiance to King Charles II in 1660 and has guarded the country's monarchs since. The Regiment’s anniversary is 23rd April (St George’s Day). The Regiment has fought in every major conflict involving British troops since their creation. Their Uniform includes a prominent Red plume on the right side of their bearskin headwear (each of the Foot Guards Regiments i.e. Grenadier, Scots, Welsh, Irish & Coldstream are identified by different coloured plumes (except Scots who wear no plume) & different button, collar and shoulder badge designs / configurations. This current issue Coldstream Guards Sergeants Red Dress Tunic is in near mint condition. The vivid red tunic has has the correct Guards buttons correctly spaced in pairs for the Coldstream Guards. The Epaulettes carry the correct embroidered Coldstream Guards White Roses and the collar with hooks has the correct embroidered Garter Stars. All of the tunic’s Guards gilt metal Garter Star buttons are present and marked on the back by the manufacturer ‘Firmin’. The tunic also has the correct red plastic button at the waist to allow wearing of a belt and brass belt hooks. The rear of the tunic and cuffs have all of their Regimental buttons and piped detail. The right sleeve has the correct Sgts tapes. The cream quilted lining is undamaged and has just light areas of staining consistent with parade use. The lining has a clean printed label with size and stores codes (all illustrated). The price includes UK delivery. Sn 15305 (NB A Coldstream Guards Grey Winter Coat & Coldstream Guards Bearskin Both In Similar Excellent Condition Are Available Separately On Our Website)
£375.00 ...Read full description
CategoryAccessories
SubcategoryClothing
ConditionUsed
Price£ 375
Sale typeTrade
Your reference15305
Recommended UsageCollection item