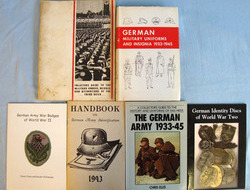 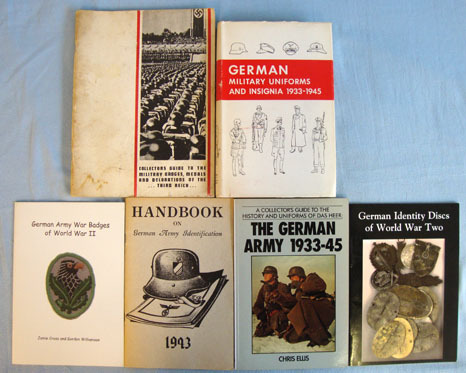 A collection of 6 books on insignia badges of WW2. The first book, 'German Military Uniforms and Insignia 1967' by W.E. Inc. this book is fully illustrated with black and white plates and sketches. The second, 'Collectors Guide To The Military Badges, Medals and Decorations Of The Third Reich' book by S & R Ross, published in 1969. The third, 'Handbook On German Army Identification 1943' by the US Military Intelligence Training Centre. The fourth, 'German Army war Badges of World War Ii' book by Jamie Cross and Gordon Williamson published in 2002 and is a limited edition of 1,000. The fifth, 'German Identity Discs of World War Two' book by Michael & Ian Burrows, published in 1995. The sixth, 'A Collectors Guide To The History and Uniforms Of Das Heer, The German Army 1933-45' book by Chris Ellis. All of these books are out of print now and becoming difficult to find. The price includes UK delivery. BO 1045