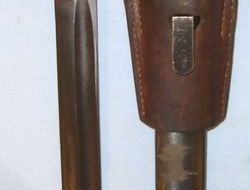 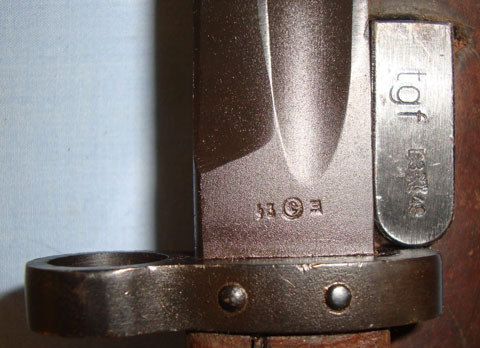 These bayonets were adopted by Czech Armed forces ion 1924 to fit a Mauser type rifle.. Many of the bayonets were captured by the Germans in 1939 and re issued to German forces. The bayonet has a blued 11 ¾” blade with fuller and reversed cutting edge. The hilt is also blued and all retain their original finish. The blade is marked with the Czech ‘CSZ & E’ mark together with ‘Lion in roundel’ and ‘24’ mark. The scabbard is also blued and the frog stud has ‘E3 48’ together with Czech Lion mark. It is also stamped with letters ‘tgf’ which most likely denotes German ownership. The scabbard is fitted with original brown leather frog. The frog has a single belt loop and all leather and stitching are intact. Price includes UK delivery. Sn 10478