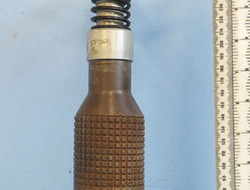 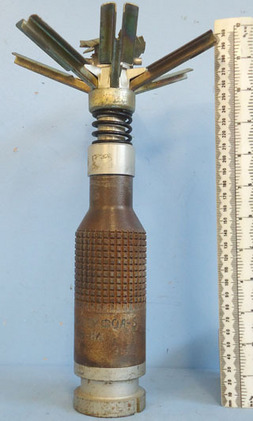 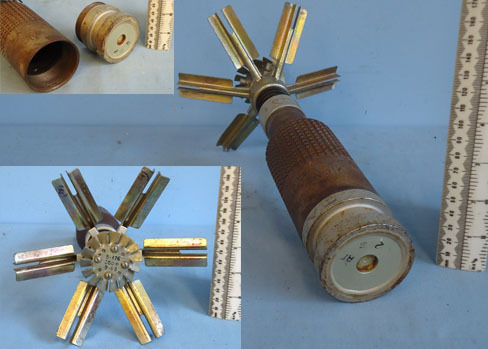 DEACTIVATED INERT. This is an unfired 1988 dated Soviet PTAB2.5KO HE-FRAG (High Explosive-Fragmentation) steel fragmentation bomblet that is dispersed from a container carried by aircraft and helicopters. This bomblet is an anti-tank/personal type with fragmentation rings to the external surface. There are 6 folding fins that deploy in flight and an arming propeller. PTAB translates to ‘Anti-tank aviation bomb. The air to ground fin stabilised fragmentation bomb was developed in the early 1950s and first introduced into service in April 1955. This fragmentation bomb is a Soviet PTAB2.5KO HE-FRAG (High Explosive Fragmentation) projectile which produced 75 splinters on detonation and was launched using dedicated rocket canisters,(ORO-57, ORO- 57K, UB-16-57 and UB-32 pods) holding 4 – 32 rockets. These canisters were fitted to standard bomb hardpoints on aircraft. Aircraft using this rocket were the MiG-15bis, MiG-17, Su-25 and the Mil 24 helicopter. The silver coloured fragmentation bomb is stencilled in black including S-5M over 3-77-406 over A-IX-2 over W-5MI. There is also a black square enclosing ET over M-16. It is also stamped in various places 3 KT 04 2DT. The bomb body is stencilled in black JTA5-2.3KO T5/?OA-3 over n-88 . The circumference of the screw in steel nose is stamped 1-A5. The rear stabilising fins are kept retracted over the rocket venturi and spring out when the sleeve is removed. The fins are stencilled in black with the following numbers in circles 29 34 64 . The arming fin on the rear of the bomblet is stencilled in black 5-17 350? 9-88 (September 1988 date). The price includes UK delivery and no licence is required to possess this inert round in the UK if retained as part of a collection or display. O 1234