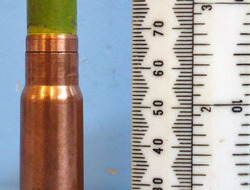 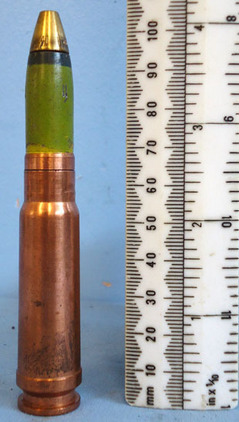 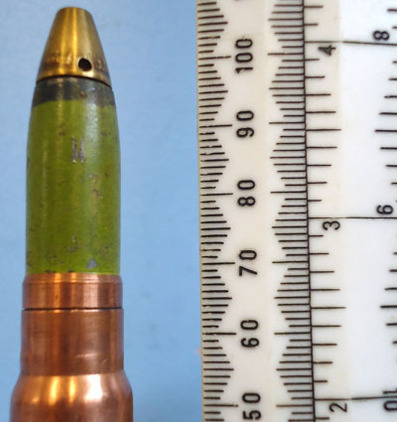 DEACTIVATED INERT This a German 13mm MG131/13 (20x82) high explosive incendiary aircraft cannon round fitted to various German aircraft during WW2, including the Me109, FW190, various night fighters and bomber aircraft. The copper washed steel cartridge case is electric primed and retains all of its copper washed original finish. . The headstamp is 41 4k avu (Silva Metallwerke GmbH, Werk Genthin) (Waffenampt)84 . The high explosive incendiary projectile ihas a copper driving band and is stamped bjp (Bosch, Robert, GmbH, Stuttgart) 8 a 41 (1941 date) and retains most of its original finish of a light green body and a dark green band under the nose fuse . The brass nose fuse is stamped 1532 eds (Zuendappwerke GmbH, Nuernberg) 41 150 (waffenampt)61 . Both projectile and cartridge case have no cracks in the necks. No licence is required to possess inert rounds in the UK if retained as a part of a collection or display. Price includes UK delivery. O 1216