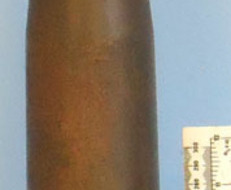 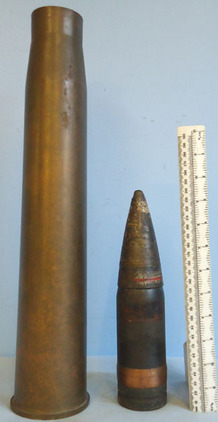 DEACTIVATED INERT. This is a British WW2 1943 dated 6pr 7cwt (57x441R)) Armour Piercing Capped, Ballistic Cap/Trace (APCBC/T) round for the British 6pr 7cwt tank gun and the towed anti-tank gun. The anti-tank gun was first introduced on November 1941. Later the gun was fitted to the Churchill III & IV, Valentine IX, Crusader III tanks and the AEC armoured car Mk III. The brass cartridge case is headstamped a 6pr7cwt I 1943 CF (Cordite Full Charge) LOT 56 there is also a manufacturers PSC monogram. The unfired projectile has a copper driving band with a British government crowfoot stamped on it and 361 . The projectile has original remains of white and red paint of the uppermost of the projectile depicting it being a APCBC/T round. The brass primer is stamped KBY 12 43 (December 1943) 5.II.VVA 3A. No licence is required to possess this round in the UK if retained as part of a collection or display. Price includes UK delivery. Sn 14333:6