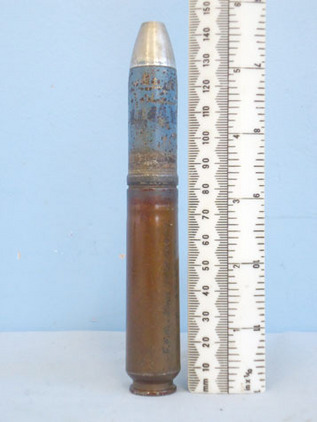 DEACTIVATED INERT. This a WW2 German 20mm FFM (20x82) Incendiary aircraft cannon round fitted to various German aircraft during WW2, including the Me109, FW190,various night fighters and bomber aircraft. The lacquered steel cartridge case is percussion primed and is headstamped 43 4b wg (Hasag, Hugo Schneider AG, Altenburg plant) (Waffenampt)54 .The projectile is a iron driving banded incendiary with a nose plug which carries traces of the blue paint on it from the projectile. The projectile retains approximately 85% of its original blue paint and is stencilled in black round the circumference wg 4/43 waffenampt. The projectile is stamped over the driving band byw (Johann Schaefer, Stettiner Schraubenwerk, Stettin) 1g 43 waffenampt .Both projectile and cartridge case have no cracks in the necks. Price includes UK delivery. No licence is required to possess inert rounds in the UK if retained as a part of a collection or display. Sn O 1107 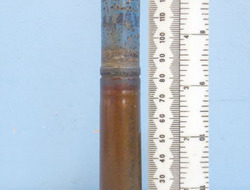