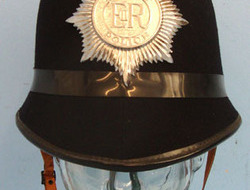 
Dorset County Constabulary (Police) was formed in 1855. On 1 October 1967 it merged with Bournemouth Borough Police to form Dorset and Bournemouth Constabulary. On 1 April 1974 this force took over some areas (mainly Christchurch and its hinterland) from Hampshire Constabulary and acquired its present name. In 1965, Dorset County Constabulary had an establishment of 544 and an actual strength of 466. This is a very good, male Constable's / Sergeant's Helmet of Dorset Police. It has a blue serge 2 panel body, rigid combe to provide greater protection during public disorder with chrome combe plate and Dorset Police Queen’s Crown (QE II) chromed metal helmet plate. The patent leather chin strap is present. The inside has leather sweat band with string adjustment cord and chinstrap. The sweatband has an ink stamp ‘7 1/8’ (size). It has a handwritten red ink Police Officer’s number ‘A41’. The price includes UK delivery. Sn 13907:15
£95.00 ...Read full description
CategoryAccessories
SubcategoryClothing
ConditionUsed
Price£ 95
Sale typeTrade
Your reference13907:15
Recommended UsageCollection item