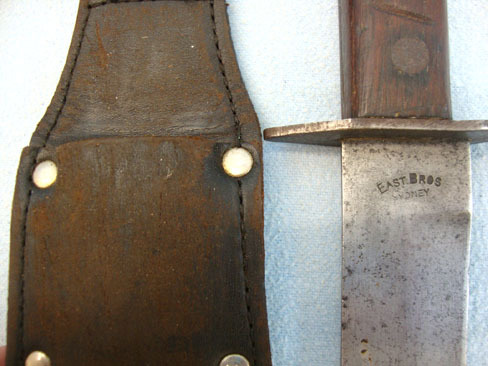 A WW2 Australian wood gripped fighting knife and leather sheath by East Brothers, Sydney. This version of the Australian fighting knife was used by the Australians and also made under contact for the US Forces based in Australia during WW2. The knife has contemporary personalised dark wood grips secured with three steel rivets. The slab gips have a hand carved initial on one side "H W". It has a thin steel straight cross guard. The blade is a single edged spear-point blade which is in good condition. The ricasso is stamped on one side with "East Bros. Sydney". The blade measures6" long, 11 1/4" overall. The dark leather sheath is stitched and riveted. It has seven rivets on the blade sheath and three further rivets on the belt loop and securing strap. It is in good condition and also has a wire belt clip. See page 174 in 'The British and Commonwealth Military Knives' book by Ron Flook. The price includes Uk delivery. Sn 11617 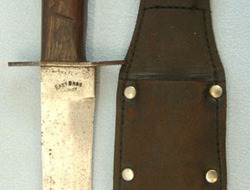