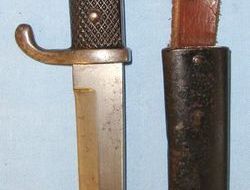 This is a German trench dagger/fighting knife. These daggers were made during the Inter War years by Eickhorn Solingen in the form of WW1 Imperial German Trench Daggers which were modelled on period German Army dress bayonets. (see page 37 Item 151 of Fred Stephens book Fighting Knives). This example is 10 ¼” overall with a 5 ¼”steel blade. It has an Eagle's head pommel (WW1 versions had functioning false bayonet button which forms the Eagles eye. Inter War versions as with this example have plain pommels without button). The grips are chequered hard rubber secured with two rivets. It has a short up-swept quillon cross guard. The blade has no manufacturer marks but this dagger is typical of those made by Eickhorn. This is a very well made and substantial trench dagger. It comes with its original metal scabbard which retains most of its original black paint. The scabbard has a riveted integral leather belt loop. The price includes UK delivery. Sn 11046