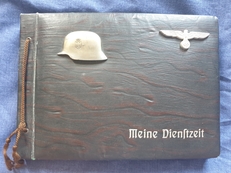 
This is an exceptional collection comprising of 140 pictures of a German NCO along with its later passport.

Please mind the fact that not all the pictures of the album are displayed here.

The pictures reveal his military career from its enrolment early in the 1930’s up to the occupation of Poland.

The first part of the collection is depicting the days when the owner was a cadet in the Unteroffizier school. He seems to train as a Signal Corps member.

Some other pictures suggest that Sergeant Karl Friedriech took part in the The Anschluss. There are a number of images showing the preparations for the invasion of Poland and later of the invasion itself.

A significant number of the pictures depict the fighting that took place in Poland, bombed road infrastructure, prisoners of war, captured equipment and the panzer corps.

The album ends with pictures from the captured port of Danzig.

For international postage please contact us via the messaging service and we will post tracked at cost....Read full description
CategoryAccessories
SubcategoryOther Accessories
ConditionUsed
Price£ 450
Sale typeTrade

In our community section
More about this: BASC prove to UK government that shooting can bene...
Display map