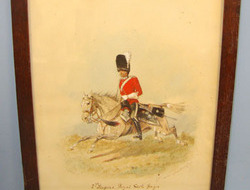 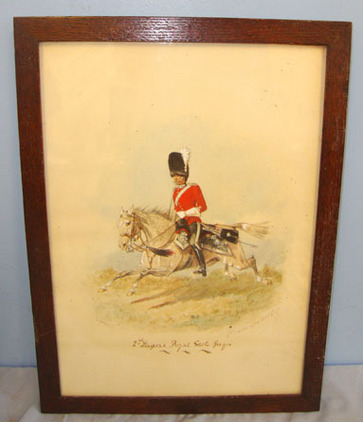 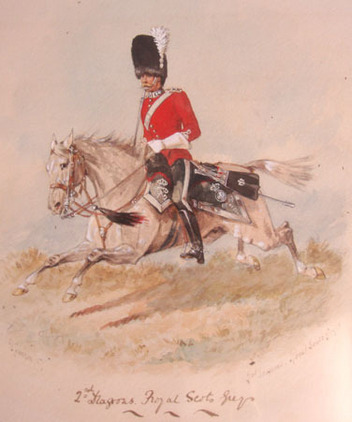 Richard Simkin (1850–1926) was a British artist and illustrator of military uniforms. Born in Herne Bay, Kent, on 5 November 1850, the son of a commercial traveller, also named Richard. He spent much of his time at Aldershot, Hampshire, after marrying his wife, Harriet, in 1880, and may also have been a volunteer in the Artists Rifles. He was employed by the War Office to design recruiting posters, and to illustrate the Army and Navy Gazette. During his lifetime, he produced water colours depicting the uniforms and campaigns of the British Army. Simkin also contributed illustrations to numerous publications including the Boy's Own Magazine, The Graphic and others. He died at his home a 7 Cavendish Street, Herne Bay on 25 June 1926, survived by his wife and two daughters. Today, his pictures can be seen in numerous Regimental museums and his illustrations appear in Regimental histories. This splendid original water colour painting by Simkin is one of 2 pictures acquired from the widow of an officer of the 1st Royal Tank Regiment (the other a black and white print of a racehorse & jockey recovered from Hitler’s store room at the Reichstag Berlin during WW2 also available on this website Sn 12860). The painting portrays a mounted Cavalry Officer above wording ‘2nd Dragoons Royal Scots Greys’. The paining is signed and dated by the artist ‘R. Simkin /87 (1887)’. The piece including its glazed brown wood frame measures 25 cms x 36 cms. The rear of the frame 2 fixed hanging rings and cord for wall hanging. Price for this original water colour by a respected War Office artist includes UK delivery. Sn 12859

In our community section
More about this: Brand New Airguns in 2021