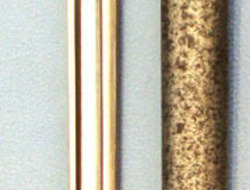 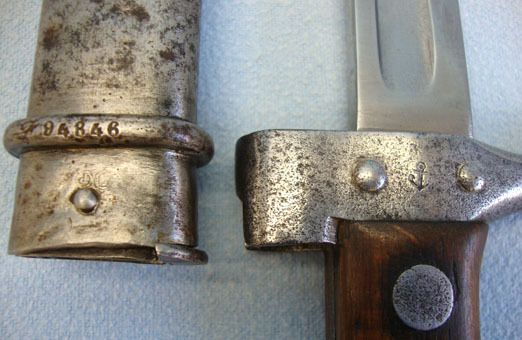 A French Mannlicher Berthier M1892 2nd Pattern bayonet and scabbard. This bayonet was made to be used with the Mannlicher Berthier Artillery Carbine and is a very nice design. This is the 2nd Pattern with wood grips and with the quillon partially removed. This was due to the bayonets serial number being on the lower part of the quillon. The bayonet has a straight sword like polished blade which measures 15 3/4" long. It is fullered, it has an unusual feature of a short fuller on the top edge of the blade near the tip which aided penetration. The blade has a notch on both sides near to the crossguard which locks the bayonet in the scabbard with a click. This is the later design with smooth wood grips secured with two rivets. The muzzle ring overlaps the grips and has a notch cut in at the rear which engaged at the rifles foresight. The crossguard is stamped with an anchor denoting Naval use. The quillon is stamped on one side with "94846". The ricasso is stamped on one side with inspection marks. The pommel has a push release which operates as it should. The scabbard is steel and has a metal belt loop which is also stamped with a matching number "94846". This is a very nice looking bayonet. (see White & Watts 'The Bayonet Book, pages 85 & 98 item 214 and An Illustrated History Of Bayonets by Martin Brayley, Page 72-75). The price includes Uk delivery. Bayo 21