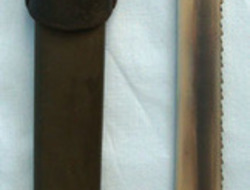 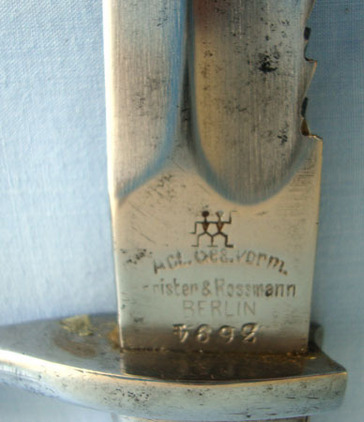 A WW1 Imperial German model 1898/05 Sawback butcher bayonet by Frister & Rossmann complete with metal scabbard and leather frog. Made by the company of Frister and Rossman of Berlin - they were originally sewing machine makers who turned to producing bayonets during the First World War. This was quite common to many German manufacturers, especially as the war progressed and traditional arms makers could not cope with demand from the army. These bayonets were issued to German infantry troops throughout the war although towards the end of the war, ersatz bayonets took over these model pattern bayonets. The bayonet has a 14 1/2" sawback single edged blade which widens towards the point. It has a medial ridge and is in excellent clean condition. The ricasso is stamped by the manufacturer 'Frister & Rossmann' and has a serial number '3694'. The back of the blade is stamped. The bayonet has a steel swept quillon, correct 9 groove dark wood grips, steel pommel with Imperial inspection mark and steel backstrap. It is complete with original steel scabbard which. The scabbard has no dents. The leather frog has four rivets and the top forms a belt loop. The price includes UK delivery.