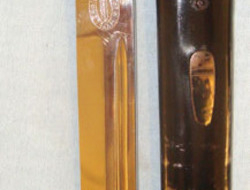 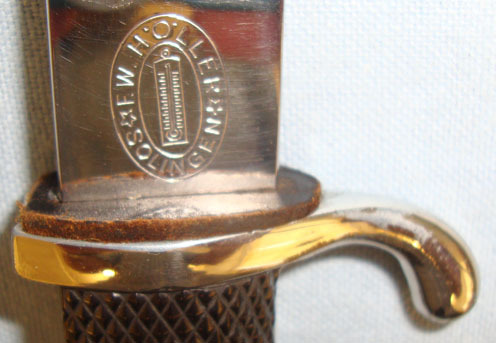 This is a near mint, M98 dress bayonet and scabbard (see the book 'German Clamshells' page 15 by Gary L. Walker & R.J. Weinand). The dress sidearm for military and civilian uniformed formations was designated the M98 Dress Bayonet. This bayonet represented a stylised form of the S. 84/98 bayonet purchased by the individual for wear with the walkout dress uniform and was worn by the mainly non-commissioned officers and enlisted personnel. This early dress bayonet has a rifle mortise and push button release. It retains the red felt in the mortise slot. This example has a pristine 7 ¾” blade (12 ½” overall). It has the maker’s name and trademark roundel ‘FW Holler Solingen’ at the ricasso. The cross guard and pommel are nickel plated. The black plastic grips are chequered and secured with two rivets. It has its original black military issue scabbard with lozenge shaped frog stud. The finish of the scabbard has areas of service wear. The price includes UK delivery. BAYO 235