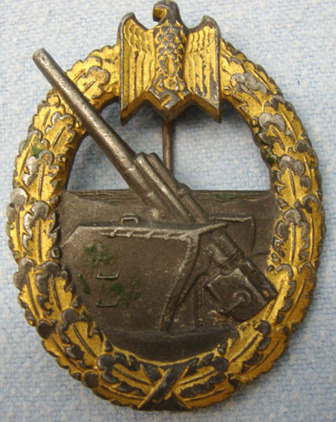 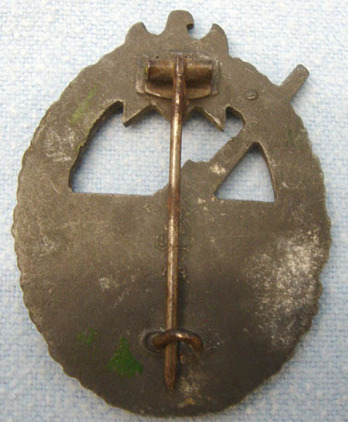 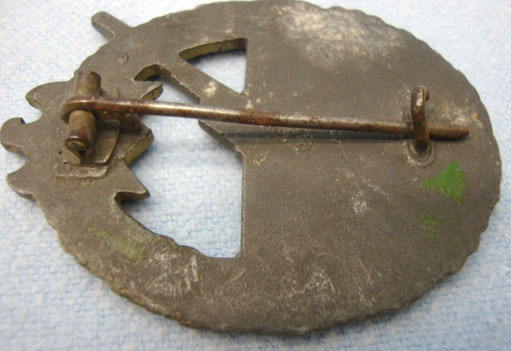 An original WW2 German Coastal Artillery Flak Badge with wearers pin. The Naval Artillery War Badge or War Badge of the Coastal Artillery (German: Kriegsabzeichen für Marineartillerie) was a World War II German military decoration awarded to the crews of Kriegsmarine land-based marine artillery and anti-aircraft units. Initially presented to only coastal air defence units, it was later awarded to crews of guns positioned against naval targets. The award was instituted on 24 June, 1941 by Grand Admiral Erich Raeder to reward the actions of both individuals and crew members. The medal, designed by Otto Placzek of Berlin, consists of an outer laurel wreath of oak leaves with the national emblem of eagle clutching a swastika (both golden coloured) at its apex. The central area features a coastal artillery cannon with the sea behind (both a grey colour). This badge is in good condition with most of the gilt still round the outside. On the reverse the wearers pin is present and still opens and closes as it should. The price includes UK delivery. BA 888

In our community section
More about this: The Gun Register by Promoter - A dedicated dealer ... 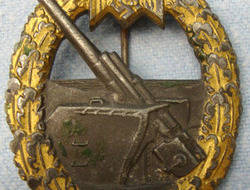