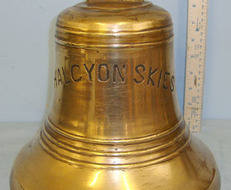 
The Halcyon Skies was a 27502 Ton Cargo ship laid down in 1971 for Court Lines London. In 1974 the ship was sold to Open Seas Cia Nav, Liberia and re-named Patianna. In 1980 it was sold to Manunited Cia Nav Greece and re-named Anna Xyla. In 1981 it was destroyed by fire at Jebel Dhanna and hulked, then scrapped in 1985. This is the Halcyon Skies London brass ship’s bell used on the ship between 1971 and 1974 before being sold on to the Liberian Company. The bell is 12" tall and the mouth 11” diameter from rim edge to rim edge. It is complete with iron striker fitted with plaited white rope cord. The bell sounds perfectly with a loud deep resonance. The top of the bell is crowned with a thick cast, holed hanging block. The front of the bell is deeply cut with large lettering ‘Halcyon Skies’ highlighted in black paint and the rear ‘London’ highlighted in red paint. This impressive Bell weighs a heavy 11.550 Kg (including striker). The price includes UK delivery. MISC 890.
£275.00 ...Read full description
CategoryAccessories
SubcategoryOther Accessories
ConditionUsed
Price£ 275
Sale typeTrade
Manufactured Year1971 To 1974
Your referenceMISC 890
Recommended UsageCollection item