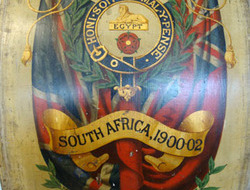 
The East Lancashire Regiment was formed in 1881 as part of the Cardwell reforms of the British Army. The Regiment was formed initially with two battalions, the 1st Battalion being created from the former 30th Regiment of Foot, and the 2nd from the former 59th. The first Regimental Depot was in Burnley, but moved to Fulwood Barracks, Preston in 1898. The Regiment recruited primarily from the new industrial towns of East Lancashire, including Burnley, Blackburn, Nelson, Colne and Accrington. During WW1 the Regiment expanded to a strength of 17 battalions which between them served on the Western Front, at Gallipoli, and in Macedonia, Egypt, and Mesopotamia (modern day Iraq). In all, they earned a total of 120 Battle Honours. The Regiment suffered a total of 7,000 casualties. Four members of the Regiment were awarded the Victoria Cross. This is a large original hand painted King's Crown wood Military band bass drum. Manufactured by Hawkes & Sons. Denman Street, Piccadilly Circus, London and the drum retains the original white label inside giving instructions on how to maintain the drum. It measures 32” diameter and is 14 1/4" wide. The wood rims and body are undamaged. The skins are missing from the drum. The drum is fitted with a large brass ring and brass collet. The drum is varnished through 1/3 of the diameter. To the front it has Heraldic Arms of Great Britain with King’s Crown and above this in a banner it has "East Lancashire Regiment 1st Vol Batt", below it has Battle Honours, a Crest below a King's Crown with "Egypt" and "South Africa 1900-02". All of the colours are excellent and rich with an even aged patina. The price for this impressive Military Band piece includes UK delivery. Misc 831
£495.00...Read full description
CategoryAccessories
SubcategoryOther Accessories
ConditionUsed
Price£ 495
Sale typeTrade
Manufactured YearWW1
Your referenceMISC 831
Recommended UsageCollection item