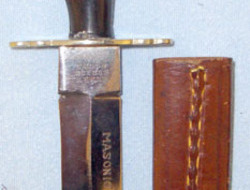 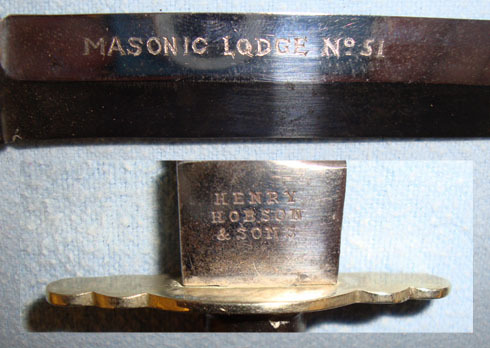 Henry Hobson & Sons were Sheffield based cutlers. The business was established in Sheffield by Henry Hobson in 1845. A London branch was opened in 1852 and later styled George Hobson & Sons. Their Queen Street factory moved to Carver Street (1901) and then to Eyre Lane, Sheffield (1912). This is an attractive sheath knife by Hobson & Sons with sheath in late Victorian form. It has an ebony handle with raised edges inlaid with mother of pearl studs. It has a German Silver cross guard and a 5” spear point blade with medial ridge. The blade has staining consistent with age but no damage. The blade has a later applied engraving ‘Masonic Lodge No 51’. The knife measures 9” overall length. Its original brown leather open top sheath has a stitched seam and single belt loop. All leather & stitching of the sheath are intact. Price for this knife by a quality Sheffield maker with Masonic connections includes UK delivery. Sn 12516:1