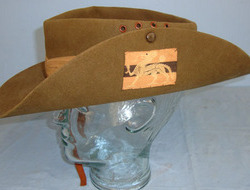 
The HKMSC were formed from ethnic Chinese soldiers serving in the British Army. Their military history can be traced back to the 1880s when Hong Kong locals were employed by the Royal Engineers in the building of barracks and defence works. Many ethnic Chinese Hong Kongers fought alongside the British troops in the defence of Hong Kong in WW2. One battle group of the British Battalions consisted of 1st Battalion Middlesex Regiment, 2nd Battalion Royal Scots and the Hong Kong Chinese Regiment. A large number of ethnic Chinese Hong Kongers were killed or became prisoners of war. The HKMSC saw active service outside Hong Kong in Burma in 1942 against the Japanese forces, they fought alongside the 1st Battalion Gloucestershire Regiment. This is an original WW2 Tropical Slouch Hat To the HKMSC. It has its original khaki Pagri headband and its khaki body is undamaged. It has its original ventilation holes at the edge of the crown and press stud fastener on the left side of the brim and skull. The left side of the brim is stitch mounted with its original embroidered cloth Divisional/ Formation Patch with vivid colour Chinese Golden Dragon on a field of red (the red colour has faded over time with light exposure) and horizontal black band. The hat has its original leather sweatband and chin strap (one end of the chinstrap is perished but could easily be replaced). Price includes UK delivery. Sn 11872:8
£395.00 ...Read full description
CategoryAccessories
SubcategoryClothing
ConditionUsed
Price£ 395
Sale typeTrade
Manufactured YearWW 2
Your reference11872:8
Recommended UsageCollection item